AFCON: Onuachu, others on target as Nigeria beat Lesotho to top Group L

Nigeria leads Group L with 15 points with Benin Republic coming second and both qualifying for the 2021 AFCON to be hosted by Cameroon. 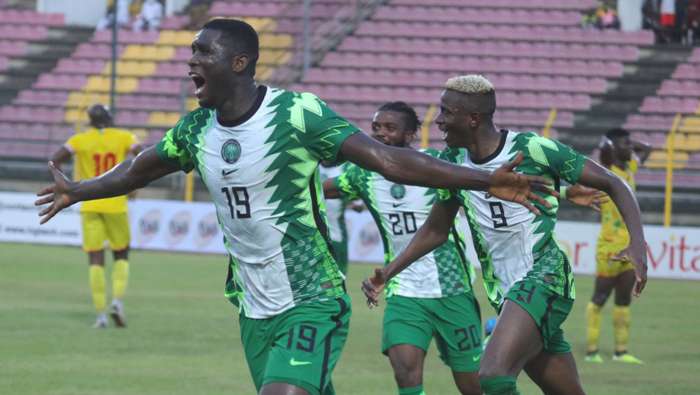 Paul Onuachu, Victor Osimhen and Oghenekaro Etebo were all on target as the Super Eagles of Nigeria defeated Lesotho 3-0 in the final fixture of the Group L 2021 AFCON qualifiers at the Teslim Balogun Stadium, Lagos on Tuesday.

Napoli striker Victor Osimhen broke the deadlock in the 20th minute with a fine finish to give the three times African champions the 1-0 lead.

Nigeria’s goalkeeper, Francis Uzoho, also made some stunning saves in the first half to keep the lead for the Super Eagles.

Oghenekaro Etebo extended the lead in the 51st minute after receiving a loose ball at the edge of the box and dribbling past the Lesotho goalkeeper to score a goal.

Leicester’s Wilfred Ndidi dominated the midfield throughout the match showing once again, while he is regarded as one of the best defensive midfielder in the World.

Troost Ekong and Leon Balogun also put up some nice defense to keep the Lesotho attack away from scoring.

Kelechi Iheanacho, Samuel Chukwueze and Iwobi also had their shots saved by the Lesotho goalkeeper.

Paul Onuachu sealed the victory in the 83rd minute with a well placed shot to take the scoreline to 3-0.

Onuachu has now scored his second goal for the Super Eagles in four days, first against Benin Republic on Saturday and now at TBS against Lesotho.

Onuachu who came in as a substitute for Osimhen just ten minutes before he registered his name on the scoresheet is also Nigeria’s Highest goal scorer in Europe with Belgian Club, Genk.

Nigeria leads Group L with 15 points with Benin Republic coming second and both qualifying for the 2021 AFCON to be hosted by Cameroon.

Coach Gernot Rohr will now be leading the Super Eagles to the second AFCON consecutively after coming third in the 2018 edition. Nigeria lost to Algeria in the semifinals of the tournament.

The air at the Teslim Balogun Stadium, Surulere was filled with trumpets and drums from Nigerian Football Supporters Club. About a few thousands of supporters were allowed to watch in the stadium.