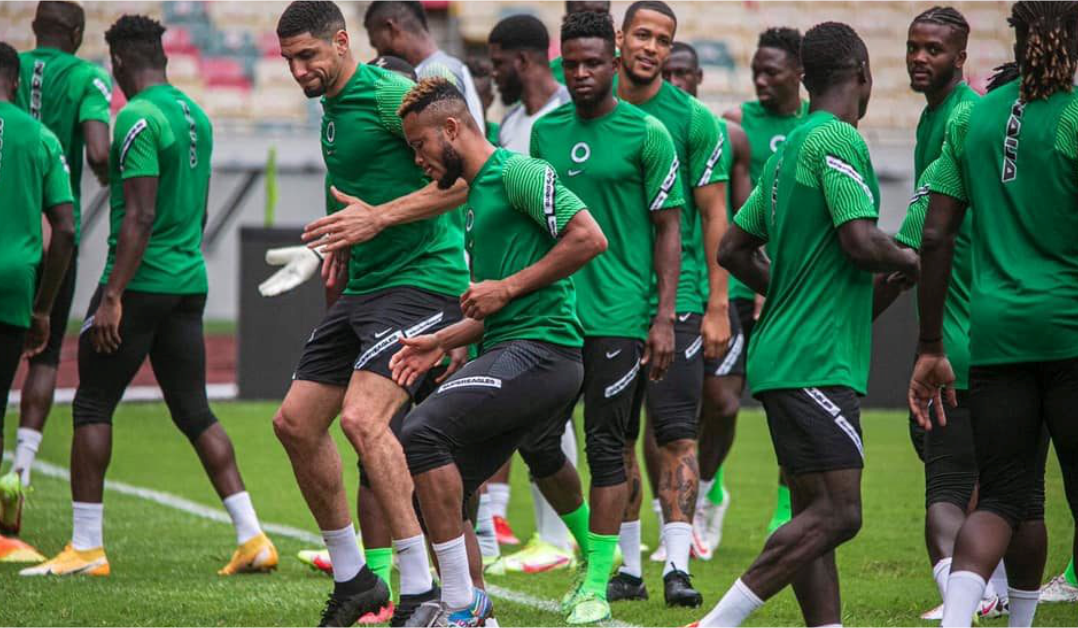 The Super Eagles on Saturday had their final training session for the knockout game against the Carthage Eagles of Tunisia at the 2021 Africa Cup of Nations (AFCON) in Cameroon.

The training took place at the annex pitch of the Roumde Adjia Stadium in Garoua.

The training was quite intense with the players involved in last minute drills ahead of the win-or-burst crunch encounter.

Sunday’s AFCON Round of 16 clash between Nigeria and Tunisia will take place at the main pitch of Stade Roumdé Adjia, in Garoua, Cameroon from 8:00 p.m.

During the training which started at 8:00 p.m. and lasted for an hour, 20 minutes, all 27 players in the squad took part.

Goalkeeper trainer Alloy Agu also drilled the quartet of Maduka Okoye, Daniel Akpeyi, Francis Uzoho and John Noble as they went through their usual routine, save for one additional training on set-pieces.

The players were, however, in boisterous mood as they looked forward to the game.

Yusuf, Yobo and Agu put them through their paces with light jogging and stretches in the first 20 minutes.

They quickly observed a one-minute water break afterwards, before going into an intensive training session in the next 40 minutes.

Agu worked on the reflexes of the goalkeepers, while Yusuf, Yobo and Aigbogun put the 23 other players through some ball work exercises for 10 minutes.

The players were then split into two groups in the next 10 minutes of the training as they worked on short passes and ball control.

They were later involved in a six-aside training with the players in each team being rotated intermittently.

An agility training was added to the mix with two players each involved in a duel to beat the buzzer.

The last 10 minutes saw the players engaged in a penalty shootout competition with Awaziem, Sadiq and Peter Olayinka all missing from the spot.

The training which started at 8:00 p.m ended at 9.20 p.m., with the team heading straight to their bus and the hotel without speaking to journalists.