Demands include a return of confiscated international passports and government-issued identity cards and the reinstatement of bank accounts. 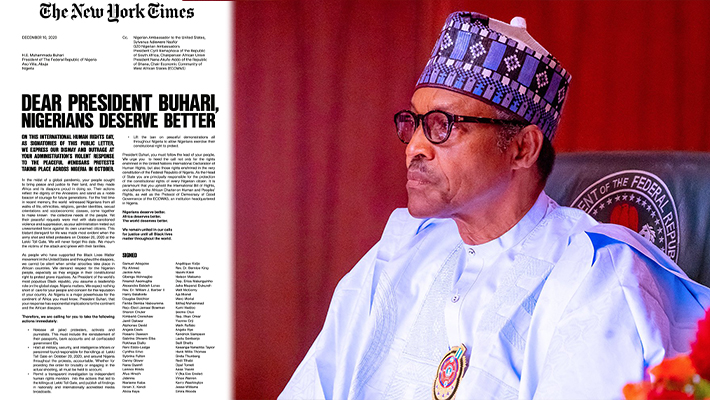 Foreign activists and celebrities have asked President Miuhammadu Buhari to lift the ban on peaceful demonstrations and hold security officers responsible for the killing of unarmed protesters during the #EndSARS campaign in October.

The celebrities and activists in an open letter sponsored in the New York Times on December 10 said they expect nothing short from the Nigerian leader than to care for the lives of Nigerians and the reputation of the country.

The letter, signed by Angelique Kidjo, Alicia Keys, Jidenna, Kerry Washington, Greta Thunberg, among others, demanded transparent and independent monitoring of the judicial process into the killing of unarmed protesters at Lekki Toll Gate on October 20.

Other demands include an immediate return of confiscated international passports and government-issued identity cards and the reinstatement of bank accounts of protesters.

Nigerian states have started hearing matters of police brutality, during which citizens have recounted their ordeal under decades of police oppression. On Monday, protesters in Lagos and Abuja returned to the streets to push for a second wave of the #EndSARS agitation, but they were met with deadly force by security agents.

On Thursday, protesters took to the streets in Rivers, an oil rich state in the Delta region, to protest the fatal shooting of a commercial tricycle driver by a police officer. The police said the officer responsible for the shooting was summarily dismissed from service and taken into custody for prosecution.