They criticised the Minister of Labour and Employment, Chris Ngige, for being against the demands of university lecturers. 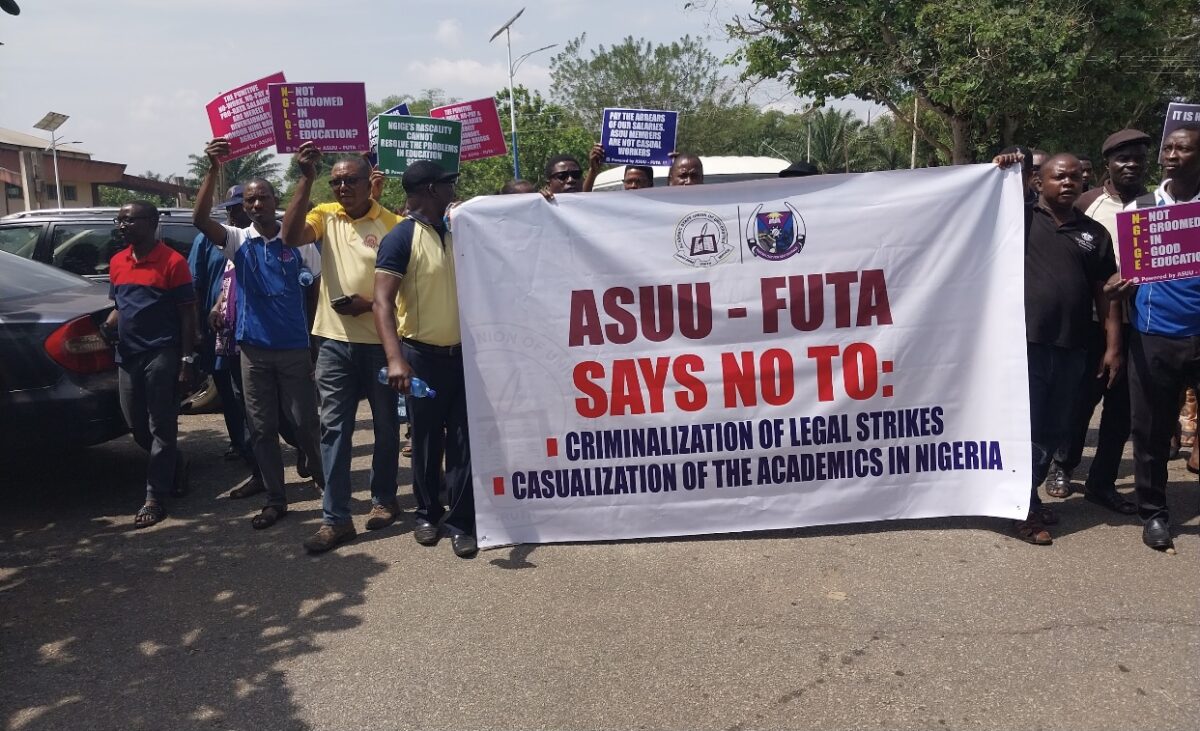 Lecturers at the Federal University of Technology Akure (FUTA) in Ondo, on Wednesday staged a campus-wide demonstration to protest non-payment of their salaries by the President Muhammadu Buhari’s regime.

The lecturers under the auspices of the Academic Staff Union of Universities (ASUU) based their action on the directives of the National Executive Council (NEC) of ASUU, mandating all the unions across the states to hold a peaceful protest against the half-salary payment by the Buhari regime.

They criticised the Minister of Labour and Employment, Chris Ngige, for being against the demands of university lecturers.

The lecturers described the regime’s invocation of the policy and refusal not to pay them for the period of the strike action as “crude and unacceptable” to them.

Peoples Gazette reports that the aggrieved lecturers were all armed with colourful placards bearing different inscriptions as they chanted solidarity songs.

Some of the placards read: “Pay the arrears of our salaries”; “ASUU FUTA says no to the criminalisation of legal strikes, casualisation of the academics in Nigeria”; “Ngige’s rascality can’t solve the problems in the education sector”.

Other inscriptions include; “The punitive non-work-no-pay and pro-rata salaries are merely diversionary”; “Ngige is just a minister, he can’t be greater than the President that appoints him”, among others.

Olayinka Awopetu, the ASUU Chairman in FUTA, said the Buhari regime was owing the aggrieved university lecturers over seven months’ salary but has since refused to pay.

Mr Awopetu noted that the regime has also not been sensitive to the plight of the university lecturers since they called off their eight months’ old strikes.

“If you go on legal strike, you shouldn’t be punished for it but we are being punished by withholding our salaries and it is illegal for the federal government to casualise the academics in Nigeria,” he told journalists during the protest.

According to him, the Buhari regime had also been planning to “casualise academics” in the country, despite that the lecturers were only calling for the revitalisation of the education sector.

“We didn’t go on strike because we wanted to go on strike but because the government failed to do its part, so we can’t be punished for that.

“This protest is to let everyone know that ASUU in general and ASUU FUTA, in particular, is condemning in entirety the casualisation of academics and the criminalization of the illegal strike,” Mr Awopetu added.

He explained that the lecturers have decided to declare a “lecture free and exam-free day” in the university to show their disapproval of the regime’s unfavourable policy.

“Today is a lecture-free and exam-free day, we can’t be in this congress and protests and classes will be going on. So, we have to let them hear us that we are not satisfied with their decision.”

Public university lecturers in the country had on February 14, 2022, embarked on strike action to demand that the federal government implement an agreement it signed with ASUU in 2009 to revitalise public university education in Nigeria.

Eight months after, the university lecturers called off the strike with an understanding that Mr Buhari’s regime would pay them their salaries and aceeded o the agreement.

But the regime through the Minister of Education, Adamu Adamu, insisted that the university lecturers would not be paid for work not done during the period of the strike.

“The Federal Government cannot pay lecturers for what they did not work for. The strike has continued to portray the country in a bad light and has succeeded in causing more pain for parents and students,” Mr Adamu said last week during his visit to Federal University, Lokoja in Kogi state.