Joseph Biden was sworn in as American president on January 20. 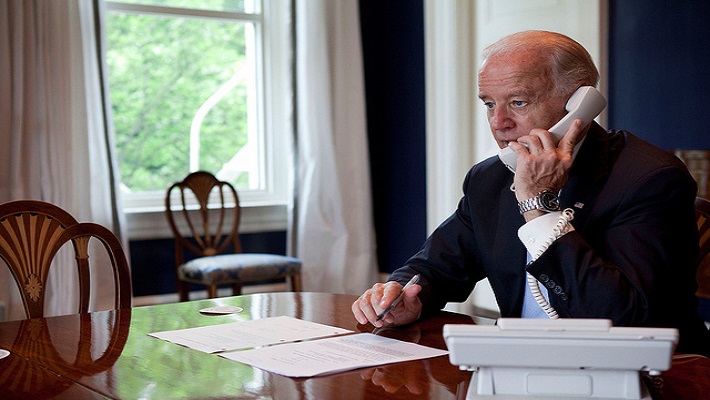 Joe Biden on the phone. [CREDIT: Who2]

U.S. President Joe Biden spoke with leaders of Canada, Britain, and Mexico in his first presidential calls since being inaugurated on Jan. 20.

In his first call to a European leader, Mr. Biden discussed the Coronavirus pandemic (COVID-19), climate change, and security with Britain’s Boris Johnson.

Mr. Johnson tweeted that it was “great” to speak to President Biden.

“I look forward to deepening the longstanding alliance between our two countries as we drive a green and sustainable recovery from COVID-19,” he wrote on Saturday evening.

A Downing Street spokesperson said they also discussed the benefits of a potential free trade deal and Johnson committed to resolving trade issues as soon as possible.

Britain is seeking new deals after its post-Brexit transition period ended and it officially left the European Union’s internal market and customs union this month.

The White House did not mention any trade discussions in a later confirmation of the call, but said Mr. Biden conveyed his intentions to strengthen the special Britain-U.S. relationship and revitalise transatlantic ties.

He also underscored support for the North Atlantic Treaty Organisation.

Mr. Biden’s first call to a foreign leader after his inauguration was to Canadian Prime Minister Justin Trudeau on Friday.

The two agreed to have a meeting next month to work on “renewing the deep and enduring friendship between Canada and the United States,” Mr. Trudeau’s office said.

Messrs. Biden and Trudeau discussed their shared vision for sustainable economic recovery and agreed to cooperate to achieve net-zero emissions.

In one of his first actions as president, Mr. Biden revoked the permit issued in March 2019 for the pipeline, which would have carried oil from Canada to the U.S., stating that its construction was not consistent with his administration’s economic and climate goals.

The two leaders discussed migration among other topics and Mr. Biden described his plan to reverse the “draconian” immigration policies of the previous administration, the White House said.

Mr. Biden plans to slow illegal migration through providing aid to countries of origin, among other measures.

The vast majority of people who attempt to make unauthorised crossings into the U.S. via its southern border with Mexico come from those three countries.

Mr. Biden’s predecessor Donald Trump had halted millions of dollars of financial help in a bid to push those countries to prevent their citizens from migrating towards the U.S.