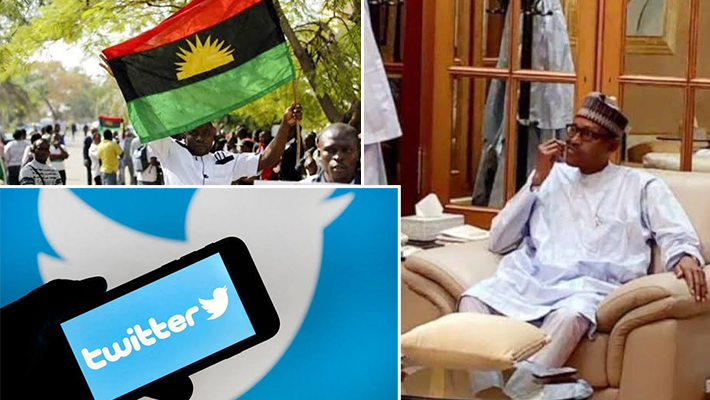 There was outrage on the microblogging platform following Mr Buhari’s tweet reacting to the destruction of 42 facilities of the Independent National Electoral Commission (INEC) across Nigeria, particularly in the South-East.

The president vowed that the people responsible for the destruction would “soon have the shock of their lives.”

He added that “many of those misbehaving today are too young to be aware of the destruction and loss of lives that occurred during the Nigerian Civil War. Those of us in the fields for 30 months, who went through the war, will treat them in the language they understand.”

Critics slammed the president for failing to resolve the nation’s protracted security crisis but vowing to unleash violence similar to what the Igbos suffered in the hands of federal government-controlled soldiers during the civil war.

However, in a statement, Twitter said Mr Buhari did not violate its rules, despite heavy criticisms that trailed the tweet, accusing the president of declaring a genocidal war on the Igbos.

“We’re writing to let you know that after reviewing the available information, we didn’t find a violation of our rules in the content you reported,” the company said after the president’s tweet was reported by several Nigerians who called for his suspension on the platform.

Twitter added that “we appreciate that you let us know what happened, and encourage you to reach out again in the future if you see any potential violations.”

The social media platform known for taking drastic actions in ensuring that its rules are adhered to has suspended several accounts for dehumanisation and contents capable of inciting violence.

In January this year, it locked the account of China’s U.S. embassy over a tweet it considered “dehumanising.”

The social media post on January 7 defended China’s policies towards Muslim Uighurs in the Xinjiang region.

The account posted that Uighur women were no longer “baby making machines,” citing a study reported by China Daily.

Twitter thereafter removed the tweet and replaced it with a label stating that it was no longer available on basis that the content violated its policy that prohibits “the dehumanisation of a group of people based on their religion, caste, age, disability, serious disease, national origin, race, or ethnicity.”