They still don’t care about us: An EndSARS memorial

In summary, not a lot has changed since the 2020 EndSARS protests ended with the Lekki Massacre. 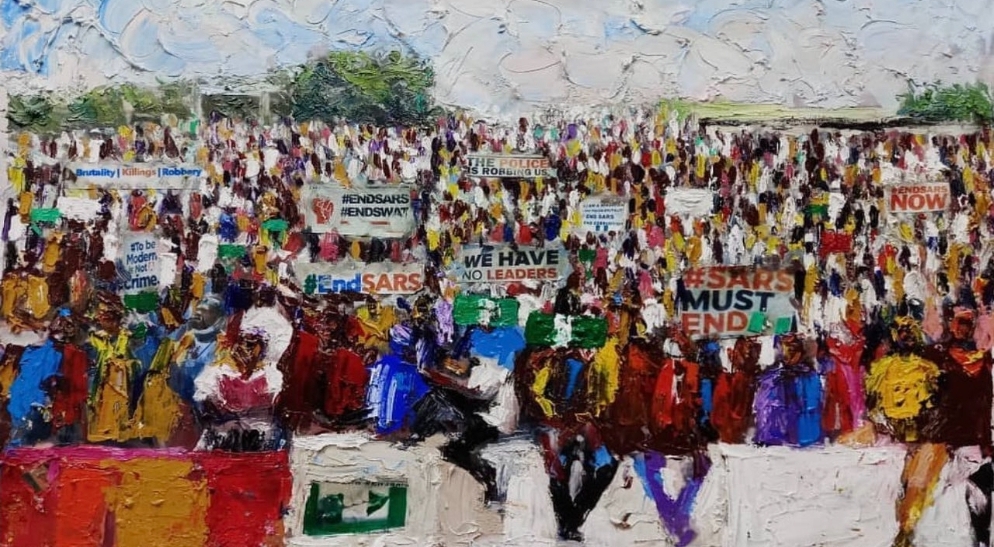 In early October 2020, Nigerian youths across the country took to the streets to protest brutality perpetuated by the Nigerian Police Force and its Special Anti-Robbery Squad (SARS). What started as a sit-in in front of the Lagos State House of Assembly soon spread across the country and beyond the country as youths came out in droves to join the protest.

On the 10th of October 2020, in an attempt to end the EndSARS protest, protesters around the country were attacked, manhandled, and forcefully dispersed by the Nigerian Police. In Ogbomosho, this excessive and unnecessary use of force against peaceful protesters led to the death of Jimoh Isiaka. The Nigerian Police denied responsibility but the Oyo State Governor Seyi Makinde visited the parents of the victim, and promised to investigate the matter.

The attempt by the police to disperse peaceful protesters reinvigorated protesters and sparked renewed interest in the protests. This attempted dispersal also demonstrated to Nigerian youths that their government was not ready to listen to them.

Between October 10 and October 20 2020, the Nigerian government tried different tactics to forcefully disperse the protests, using force and multiple devious and illegitimate means which led to the death of more protesters. It also led to the attack of protesters by state sponsored and politically motivated thugs in Lagos and Abuja, and what some perceived to be members of the DSS in Abuja. However, all their efforts were in vain and only strengthened the resolve of the protesters, as they remained steadfast and fully focused on the objectives. But instead of doing the right thing, the Buhari-led administration showed its true color by unleashing terror on the protesters.

On the 20th of October 2022, EndSARS protesters were forcefully dispersed with warfare-level brute force as the Nigerian Army opened fire on them at the Lekki Tollgate, killing and injuring scores of unarmed civilians. This despicable act and blatant breach of citizens’ rights were captured live on video. After the Army was done, the Police took over and unleashed their own terror on citizens, sending some to their early grave. They then cleaned up the scene; took away the bodies, retrieved bullet and shell casings, and sent janitors to clean up the blood-soaked scene.

The following day, the Nigerian government denied killing anyone, even though there was plenty of evidence that suggested otherwise. They deployed multiple tactics to undermine the protesters, putting up different laughable press conferences that did anything but address the issues. They even went as far as depicting the protesters as criminals.

The public display of foolishness by various members of the Buhari government continued with many of them making a mockery of the rule of law. Like the “Infamous Fashola Holmes” moment when the former governor of Lagos state miraculously found a portable camera at the tollgate a few days after the Lekki Massacre. President Muhammadu Buhari even infamously insinuated that the “viral DJ Switch Instagram Live video” might have been doctored to make the Nigerian government look bad and his government did everything but listen to protesters.

In the aftermath of the Lekki Massacre, the Nigerian government disbanded the Special Anti-robbery Squad (did they, though?), Governor Babajide Sanwo-Olu denied the Lagos State involvement in the shooting of protesters while the army claimed the Lagos State government invited them but denied killing anyone or using live ammunition at the Lekki tollgate.

The Lagos State Government set up a four (4) man judicial panel to look into the October 20 killings, led by Lagos State Attorney-General and Commissioner for Justice, Mr. Moyosore Onigbanjo (SAN). Other states also set up judicial panels to look into the activities of SARS and the EndSARS protests in their states. However, these panels did not exactly do a lot to fix the situation as most of them failed to fulfill their mandate. While some states couldn’t carry out an extensive and transparent investigation into the matters at hand, others like Lagos reached resolutions and made recommendations, which were largely rejected/ignored by the government.

In summary, not a lot has changed since the 2020 EndSARS protests ended with the Lekki Massacre; no one has taken responsibility for sending the army to the Lekki Tollgate or killing innocent civilians who were peacefully protesting their right to a decent and brutalization-free life. Despite investigations and damning reports by local and foreign media houses, nobody has lost their jobs, neither has anyone been prosecuted for the killings of dozens of innocent civilians. Multiple protesters are still languishing in jail or unaccounted for while young Nigerians like Eromosele “Eromz” Adene were dragged to court by the Nigerian government.

Six weeks after the Lekki Massacre and the supposed disbandment of the SARS, the Nigerian government announced the formation of the “Special Weapons and Tactics Team” (SWAT). Many Nigerians including #EndSARS protesters know SWAT is just a replacement for SARS, and their mandate remains to tackle ‘small’ special crimes, and spend the rest of their time brutalizing citizens and serving the purposes of those in power.

Fast forward to two years later, justice has still not been served. I mean, some victims were awarded sums of money as compensation, but police brutality is still rampant and insecurity is now at an all-time high. Nothing has gotten better and the Buhari-led administration is still denying the Lekki Massacre happened, while protecting its perpetrators. Even today, the second year anniversary of the #EndSARS protests, the police once again harassed, assaulted and brutalized citizens who just want to remember their fallen comrades and demand justice. What could be more insensitive?

At every turn when a government is given an opportunity to rise to the occasion and stand with the people, the Nigerian government has failed. From performing its statutory duty to taking up the mantle of leadership when the people need one, the government has shown it doesn’t give a damn. In every major incident that has taken place in recent history – Covid-19 palliative, EndSARS protest, ASUU strikes, and most recently, the flooding in half the country – the Nigerian government has continuously shown its lack of capacity, capability, empathy and emotional intelligence to lead. So, are we going to keep letting them get away with it? In the words of the great Micheal Jackson, when do we say “enough is enough of this garbage?” Well, maybe when we take our anger to the polls and kick them out, because it is clear as day that THEY DON’T REALLY CARE ABOUT US!”

Chidi Okereke writes from Lagos. You can reach him on Twitter via @Chydee