The match, which is the major live sports event where full crowds are allowed in Nevada, is the third meeting between the fighters. 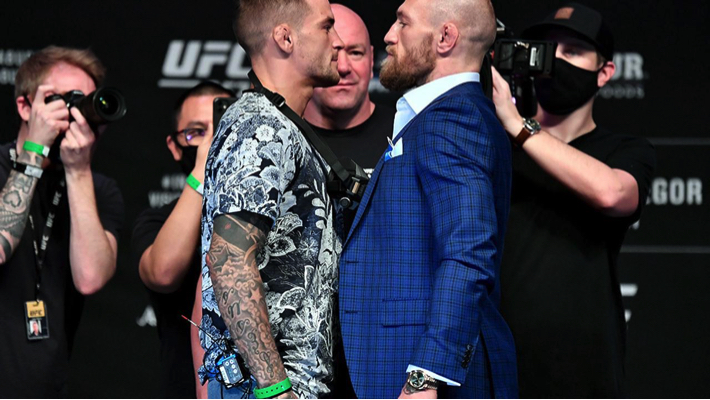 Top mix martial artist, Conor McGregor, will face off with Dustin Poirier in the main event of UFC 264 which takes place in the T-Mobile Arena in Las Vegas, Nevada on Saturday.

The match, which is the major live sports event where full crowds are allowed in Nevada, is the third meeting between the fighters.

McGregor and Poirier first fought in 2014 at UFC 178. At that time, Conor was a young contender moving up on his way to the UFC featherweight title and Dustin was the toughest test of his career; the one he had to get past to prove he deserved a shot at the champion, Jose Aldo.

The fight did not last 90 seconds. Conor won the fight by a devastating knockout and went on to win both the Featherweight & Lightweight titles; the first person to hold both simultaneously.

Dustin Poirier, on the other hand, moved up to lightweight and eventually won the interim lightweight title but unfortunately couldn’t unify the belts when he fought Khabib Nurmagomedov in 2019.

The second time both men fought, at UFC 257 in January 2021, Conor was coming off a dominant knockout of Donald Cerrone but he was 1-1 in his last 2 fights and had only fought twice since 2016.

Dustin Poirier, in that time span, had amassed a record of 7-1-1 and was the top contender in the 155lb division.

Going into the fight, Conor was expected to get the same result he got in the first fight.

It did not go according to plan, he was knocked out in devastating fashion by Dustin in the second round.

The outcome of the fight then necessitated a trilogy to settle the tie. Saturday’s fight presents different stakes for both fighters.

Dustin is still the number one contender in the Lightweight division and turned down a chance to fight for the vacant title to give Conor McGregor an immediate rematch.

He believes he’s the best fighter in the division and that once he gets done with Conor, he will fight for the title again and become the champion.

Conor, on the other hand, is fighting to save his legacy. He needs to prove to himself, and to the fans that, after losing 2 of his last 3 fights, he still has what it takes to be a champion.

If Conor McGregor loses this fight, he will be in a position he has not been since he fought Dustin Poirier the first time, a contender chasing glory amidst a multitude of doubters who say he’s not good enough. If he wins, he will have a chance to become a two time Lightweight Champion.

The UFC 264 Card also includes South African Dricus Du Plessis, who is currently 1-0 in the UFC and will be looking to get his second win against Trevin Giles.

Conor McGregor topped Forbes list for the Highest Paid Athletes in 2020 and he’s one of the most recognisable celebrities in the world.