The previously concessioned toll road is now a public asset after Lagos repossessed it. 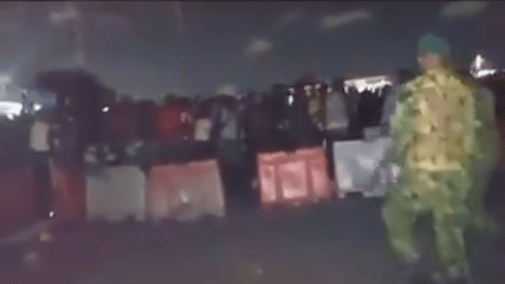 Bola Tinubu on Sunday proposed that revenue from the Lekki Toll-Gate should go towards succour for victims of military shooting of October 20.

Mr. Tinubu said victims of police brutality in the state should generally benefit from the proceeds.

Mr. Tinubu in a statement on Monday also absolved himself from allegations of ordering the deployment of soldiers against peaceful protesters.

“I propose to the government that the tollgate be left closed for an indefinite period.

“If it is reopened, revenues should be donated to the confirmed victims of the Lekki attack as well as to other identifiable victims of police brutality in Lagos.

“Let government use the money to compensate and take care of those who have lost life or limb in the struggle for all citizens to go about the quiet, peaceful enjoyment of life without fear of undue harassment at this or that checkpoint,” Mr. Tinubu said.

On the allegations that he owned the Lekki Toll-Gate, Mr. Tinubu described the facility as a public asset of which he had no business interest in.

On his involvement in the killings, he said: “I did not order this or any assault against anybody neither do I have any prior knowledge about this sad event.

“The present situation clearly does nothing to profit me politically or otherwise.

“It has complicated matters for me because many people now wrongfully blame me for a violent incident in which I played no part.

“Still, I stand strongly behind the people of Nigeria and affirm their right to protest peacefully.”

The APC leader condemned the use of force on peaceful protesters.

“ The use of strong force against any peaceful protesters is indefensible.

“It is completely outside the norms of a democratic society and progressive political culture to which I have aspired and devoted public life.

“It is my firm belief that no one should be harassed, injured or possibly killed for doing what they have the constitutional right to do in making their contribution to a better, more equitable society,” he said.

President Muhammadu Buhari is widely believed to have ordered the massacre after protesters refused to back down on their agitation despite entreaties from his administration.

The protesters said the president’s promises did not go far enough and were not immediately actionable. This appeared to have led the president to back down on his initial position against deployment of troops to quell protests.

One week on, Mr. Buhari has yet to comment on the military operation, despite widespread condemnation, including by Bill Clinton and President Donald Trump.