“I wish the government can actually do this practically not only on paper so that I can enjoy the education they spoke about.” 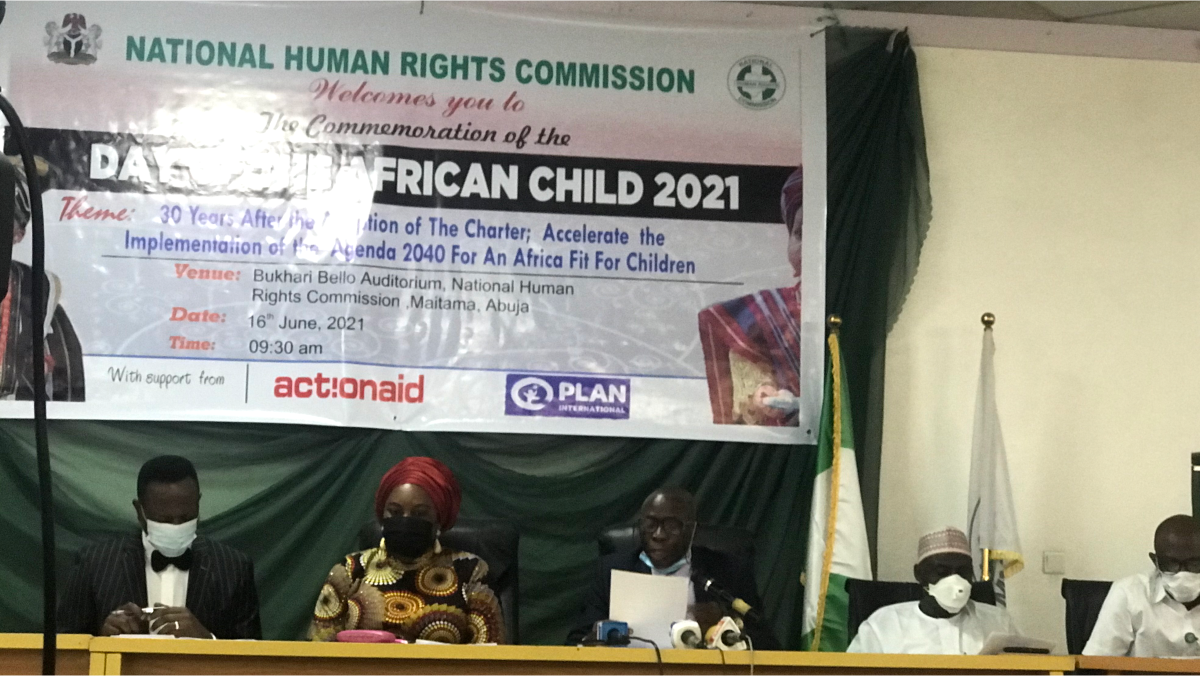 2021 Day of the African Child in Abuja

ActionAid Nigeria, a Civil Society Organisation, has described a proposal in the Senate to hang a 15-jail sentence on payers of ransom as ridiculous, arguing that the responsibility should be placed on the kidnappers, not the victims.

Adewale Adeduntan, a top official of ActionAid Nigeria gave the assertion at the celebration of the 2021 Day of the African Child in Abuja on Wednesday.

The event was organised by the National Human Rights Commission in collaboration with ActionAid and PLAN International at the Commission’s auditorium.

The Day of the African Child which is celebrated every June 16 is meant to remember hundreds of black children gunned down on the date inSoweto, South Africa while staging a protest march against systematic discriminatory practices in the education sector of their country.

The theme for this year’s Day of the celebration is titled: “30 years after the adoption of the charter; accelerate the implementation of the agenda 2040 for an Africa fit  for Children.”

The agenda 2040, which is a framework for the implementation of child rights on the African continents, is made up of 10 aspirations which embody 10 critical sectors of child’s right inspired by the African Union agenda 2063, decisions and declarations of the AU commission and its human rights organs, especially the children committee.

In Nigeria the child right act which was passed in 2003 had been adopted by 25 states of the federation.

The event had in attendance children and students, teachers and parents, CSOs and NGOs. Representatives of government ministries, departments and agencies were also present.

The executive secretary, National Human Rights Commission, Tony Ojukwu, who was represented by Abdulrahman  A.Yakubu, in his goodwill message says the agenda 2040 10 aspirations are each accompanied by an implementation plan recommending specific actions to be taken by states towards its full realisation.

He urged the concerned  MDAs  to adopt some strategies to address the root causes of conflicts and engage in early warning mechanisms to eliminate the impact of armed conflicts on children.

Speaking on the socioeconomic impact of COVID-19 and the menace of insecurity on the Nigerian child, Mr Adeduntan, who is the social mobilisation manager, ActionAid Nigeria, says the entire school system needs to be placed on red alert and scrutinised.

“Given the results or our current realities, we recommend that the entire school system be scrutinised and placed on red alert for the state actors to devote adequate attention and resources towards ameliorating this menace of insecurity,” Mr Adeduntan said.

When asked about the safety of the Nigerian child, Mr Adeduntan says the 15 years imprisonment set by the Senate for parents who pay ransom is ridiculous and should be placed on the kidnappers instead.

“I take that to be ridiculous, the primary responsibility of the government is to protect life and property. How do I keep responding to a system that is not responding to my aspirations and needs?

“Whether we like it or not, that opinion or motion will not stand, it’s like standing the pyramid inverted. The order should be placed  on the kidnapper or bandit,” he opined.

He went further to say school security needs to be put in the forefront of security discussions with proactive long term planning. He urged the government to implement policies that will improve security, education expenditure and national income to improve school enrollment.

An 11-year-old Benjamin Steve from Divine Heritage Home Kuje spoke on aspiration 6 at the event. He said “every child benefits fully from quality education.

“I wish the government can actually do this practically not only on paper so that I can enjoy the education they spoke about.”