“As of April 2021, the inflation rate was the highest in four years. Food prices accounted for over 60 per cent of the total increase in inflation.” 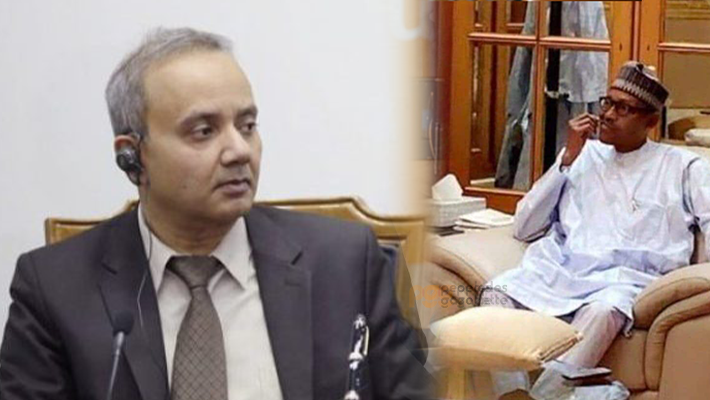 A composite of Buhari and Chaudhuri used to illustrate the story

Mr Buhari, in his Democracy Day speech, said, “in the last two years, we lifted 10.5 million people out of poverty – farmers, small-scale traders, artisans, market women and the like.”

But the World Bank in a statement on its website on Tuesday, said about seven million Nigerians dropped below poverty line due to increase in inflation in the country in 2020.

“In 2020 the Nigerian economy experienced a shallower contraction of -1.8% than had been projected at the beginning of the pandemic (-3.2%).

“Although the economy started to grow again, prices are increasing rapidly, severely impacting Nigerian households,” the statement reads in part.

“As of April 2021, the inflation rate was the highest in four years.

“Food prices accounted for over 60 per cent of the total increase in inflation.

“Rising prices have pushed an estimated seven million Nigerians below the poverty line in 2020 alone.”

Shubham Chaudhuri, the World Bank Country Director for Nigeria, was quoted in the statement to have said, “While the government has made efforts to reduce the effect of these by advancing long-delayed policy reforms, it is clear that these reforms will have to be sustained and deepened for Nigeria to realize its development potential.”

Earlier in February, a World Bank report had projected that an additional 20 million Nigerians could be impoverished by 2022.

“So, with slower growth and fewer jobs, and then coupled with high inflation, our estimates are that the number of the poor will increase by about 15 to 20 million people by 2022 from the about 83 million people in 2019,” Ms Joseph-Raji said.