The SSS is charging the activists for the disturbance of the peace. 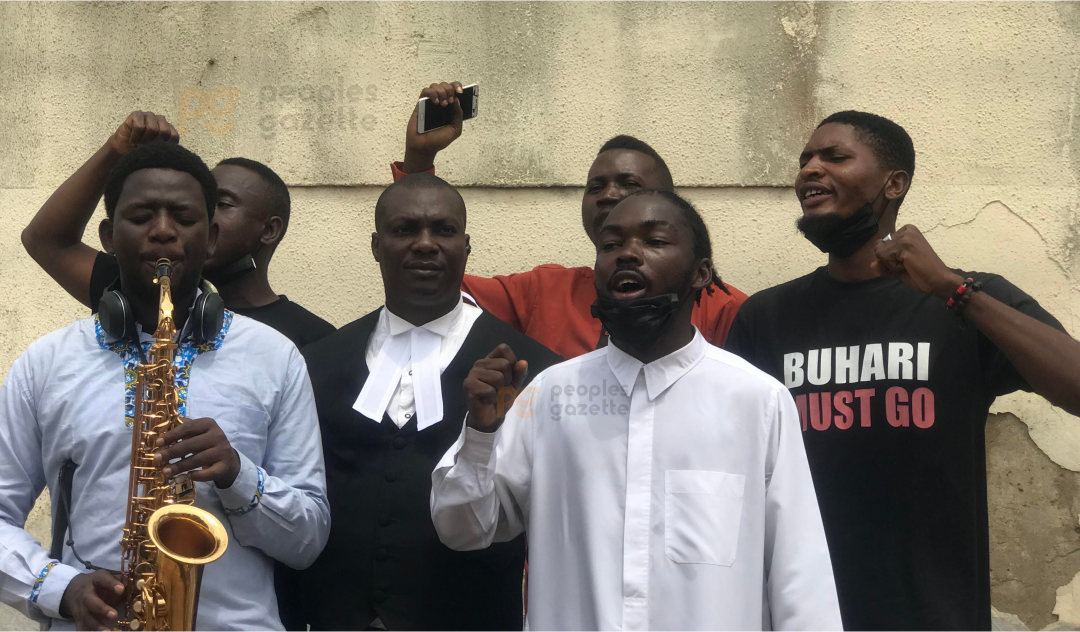 Counsel to the five #Buharimustgo protesters arrested on July 4 at Dunamis International Gospel Church has lamented the various uncertainties emerging from the matter filed against them by the State Security Service.

Speaking to journalists on Monday at the Mpape Magistrates’ Court, their counsel, Tope Temokun, decried being tossed about two different magistrate courts from the last adjourned date and Monday, September 20, the date slated for hearing.

“We were surprised when they said the matter will be following the magistrate to the Wuse court. The court is the court whether a judge transfers or not.

“There must be certainty in the judicial process. Here we are at the Mpape court. We are now being pushed here and there and it is not fair,” Mr Tomekun said.

The matter was slated for hearing today at the Wuse magistrate court in Abuja, however, on arrival at the court, the defendants were informed that the case file had been moved back to Mpape magistrate court without prior notification.

“The matter was adjourned for today at Wuse zone 2. We were there before 9:00 a.m. this morning. On getting there we discovered that our matter was not on the cause list. When the court resumed sitting, we brought it to the attention of the magistrate.

“He informed us that after he was transferred, he came along with the case files of matters before him but he got a directive to return some cases back to Mpape and ours was among them,” Mr Temokun said.

“The matter should not have left here in the first place, but since they said the case file has been transferred, we had to rush there that day to meet up just like today. As the defendants, we ought to have a date,” he added.

He continued “We are in court because we were brought to court and we ought not to wait for anybody to get a date. The Wuse court never gave us a reason for moving the matter here.

“We had to rush out of Wuse court to Mpape magistrate court and on getting here we discovered that the court was not sitting.”

Mr Temokun said the case file should not have followed the magistrate to his transferred location. According to him, he would have again applied for the case to be struck out today just as he orally applied at the last adjourned date.

The five activists instituted a separate human rights suit at the Abuja division of the Federal High Court against President Muhammadu Buhari, the Attorney-General of the Federation, Abubakar Malami, and Dunamis pastor, Paul Enenche.

Mr Temokun told Peoples Gazette that the human rights case filed before the court seeks to challenge the legality of the arrest of the five activists by SSS and the enforcement of their human rights.

“We are saying that their arrest in the first place is illegal. The matter before the federal high court is to know whether it is legal for them to have been arrested that day,” He said.

On July 26, the court ordered the activists release from the SSS unlawful detention.

However, the SSS disobeyed the court order, and on July 28, headed to a chief magistrate’s court in Mpape to arraign them on charges of disturbance of the peace.