The ruling party magnate secures a 2,700 square metres property on the northeast corner of Maitama, all but confirming his 2023 presidential run. 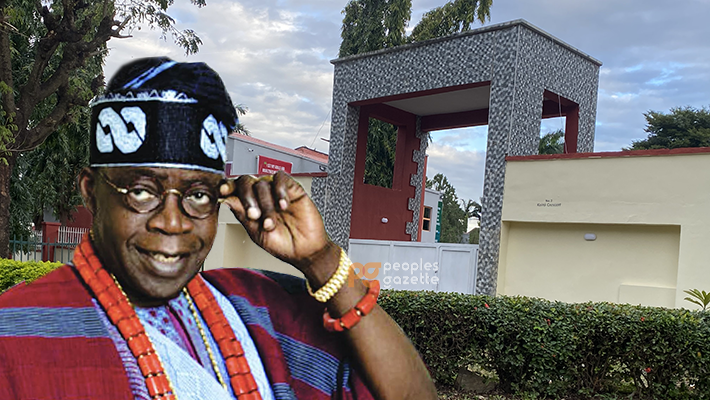 Bola Tinubu has quietly opened a campaign headquarters in a Maitama property that once housed a private school, Peoples Gazette can report, all but confirming his entry into the 2023 presidential race.

The 2,700 square metres property, former home of Eagle Heights International Schools, sits just north of the Philippines Embassy at 2, Kainji Crescent and just across the street from Body of Benchers, which regulates admission into Nigerian legal education institutions.

The property was secured for two years at N15 million per annum, a good deal in the exquisite neighbourhood that is credited more to Mr. Tinubu’s influence than fortitude, according to campaign officials familiar with its financial commitments.

There were no immediate signs from outside that the property holds Mr. Tinubu’s campaign office, but sources within the campaign told the Gazette that activities have intensified inside for the former Lagos governor’s presidential bid.

A campaign insider told the Gazette that the office was deliberately tucked between at the conspicuous intersection of Kainji Crescent and Lake Chad Crescent because they needed a place that would provide just enough space needed to run the primaries exploration.

Depending on how activities expand ahead of primaries and general elections, the campaign may still move to a location in downtown neighbourhoods like Garki, Central Area or Wuse, our sources said.

A spokesman for Mr. Tinubu did not return requests for comments from the Gazette Monday morning.

Mr. Tinubu has long been rumoured to be interested in running for president, but he has sparingly obfuscated questions around his ambition and clearly has not begun open consultation as an aspirant.

But his supporters have been coordinating in Lagos, Abuja and elsewhere to work towards a seamless strategy that will see him clinch the APC presidential ticket, the Gazette learnt.

Abiodun Faleke, a senior federal lawmaker fabled for his acerbic take on parliamentary business, is a key coordinator of the new campaign office and will likely play a top role in Mr. Tinubu’s run, the Gazette heard from sources involved in emerging decisions within Mr. Tinubu’s political circles.

Mr. Tinubu’s circles are confident of his chances, but they could not tell yet whether or not they would address the numerous corruption allegations against him before the primaries.

Although he has no active corruption trials pending against him, and has previously been extricated by an anti-corruption tribunal, Mr. Tinubu nonetheless continues to face some of the most unsavoury, enduring corruption perceptions in Nigeria.

His decision to order bullion vans bearing cash into his private residence on the eve of last year’s general elections has continued to haunt him and his family, with Deji Adeyanju and other anti-graft campaigners describing it as primitive and petitioning the EFCC — which has so far been too timid to take action.

A career accountant with a track record in several professional services firms, including Arthur Anderson and Deloitte, Mr. Tinubu was first elected to the Senate in a wave that sought to drive the military out of power in 1992.

He became a pro-democracy campaigner following annulment of the presidential election that was held at the time, and even spent time in exile. He returned home to join the process for civil rule in 1999, winning the Lagos governorship election first that year and again in 2003.

Mr. Tinubu is financially stable enough for his presidential run, and one of his aides told the Gazette that his fund-raising ability will be bolstered by his vast political and business ties. He also holds the unofficial but influential APC national leader role and a key decider in the alliance that brought President Muhammadu Buhari to power in 2015.

Sources said the former Lagos governor will have a stiff competition in the APC field. Potential candidates include Kayode Fayemi, Ibikunle Amosun, Rotimi Amaechi and Godswill Akpabio, although neither has publicly disclosed interest in the race.

Mr. Tinubu has previously sidestepped questions about whether or not he would run, preferring instead to keep his cards to himself and his trusted allies. The manoeuvre is largely typical of Nigerian politicians in the early days, and Mr. Buhari was only sworn in for a second term last May — leaving roughly two and a half years before Nigeria would have another leader.

But the revelation that Mr. Tinubu has now secured a property for his presidential run could compel other potential candidates to intensify their exploration, an APC strategist Sarah Namdas told the Gazette Sunday night.

“They are all looking forward to a dog-eat-dog race and will be closely monitoring each other’s strategic moves,” Ms. Namdas said.

Ms. Namdas said Mr. Tinubu would be ready to play dirty, but he would count on Mr. Buhari’s support because realising his presidential ambition can only come from winning the party’s tickets.

“Since he was a major factor in how the president came to power in 2015, he would ordinarily count on the president’s support,” Ms. Namdas said. “Whether the president would see the next election as Bola Tinubu’s turn is what all of us in the party cannot wait to see.”