The presidential media aide received N3,129,530.64 in illegal salaries for the three months he claimed to have resigned and didn’t work as a federal employee. 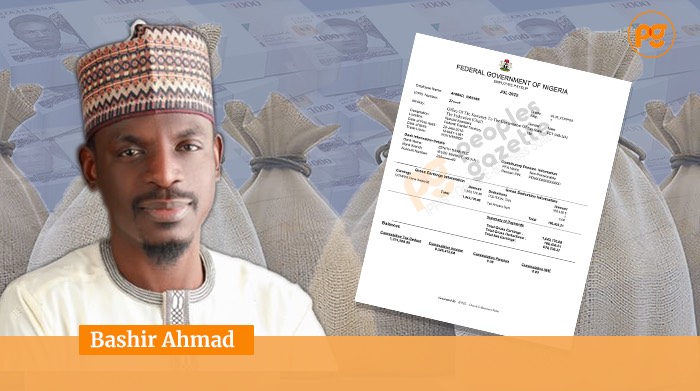 Despite the resignation of President Muhammadu Buhari’s aide Bashir Ahmad in May, he has continued to draw illegally from the federal government’s coffers, receiving his May, June and July salaries in full, according to federal payroll records obtained by Peoples Gazette.

Having submitted his expression of interest and nomination forms for the APC House of Representatives ticket on May 11, Mr Ahmad removed his designation — personal assistant to the president on new media — from his Twitter bio, a move that signalled his resignation from the regime.

Mr Ahmad began publicly describing himself as a former aide to the president, including during several campaign stomps in his home Kano state.

But records from the Integrated Payroll and Personnel Information System (IPPIS) for federal officials showed Mr Ahmad received millions in salaries for May, June and July under his payroll number 37***1. Mr Ahmad’s monthly salary stood at N1,043,176.88, with his take-home coming to N876,738.37 after statutory deductions, records showed.

Therefore, Mr Ahmad received N3,129,530.64 in illegal salaries for the three months he claimed to have resigned and didn’t work as a federal employee. The illegal payment did not include a miscellany of allowances and federal estacodes attached to Mr Ahmad and other presidential aides.

Federal payroll regulations required immediate deletion of Mr Ahmad’s banking information from the system following acceptance of his resignation by the president in early May. Federal payroll management officials told The Gazette under anonymity that some of the ministers who were compelled by the president to step down from office over their political aspirations had their banking credentials removed immediately.

Mr Ahmad told The Gazette he had returned the salaries received during the period of his resignation but failed to provide evidence of refund.

“I had returned the salaries I received during the period I wasn’t in the office,” Mr Ahmad said in a message Monday evening. He declined a request to supply evidence of his refund of the illegal payments to the federal treasury.

It is illegal to claim payments from federal accounts after an official has been announced to have resigned, retired or sacked from office, said anti-corruption campaigner Lanre Suraj.

A spokesman for the Independent and Corrupt Practices Commission (ICPC) did not answer a message seeking comments on the matter.

On Sunday, Mr Buhari announced he had reappointed Mr Ahmad to an elevated position as a special assistant on digital communications — as against the personal assistant cadre he held since January 2016— months after he failed to clinch the ruling party’s ticket for the federal parliament.

It was unclear whether the president was in on the scheme or whether he would have offered Mr Ahmad a high position that would presumably earn him larger salaries had he been informed. A spokesman for the president did not return a request seeking comments.

Mr Ahmad was among a cohort of presidential aides that The Gazette exposed as taking part in a federal job racket in early 2021. Although he denied the allegations, the agency at the heart of the scandal exerted disciplinary actions against three officials who were wrongly accused of leaking the information to our reporters.