They urged the federal government to save the local currency by addressing the rising inflation and other causative factors. 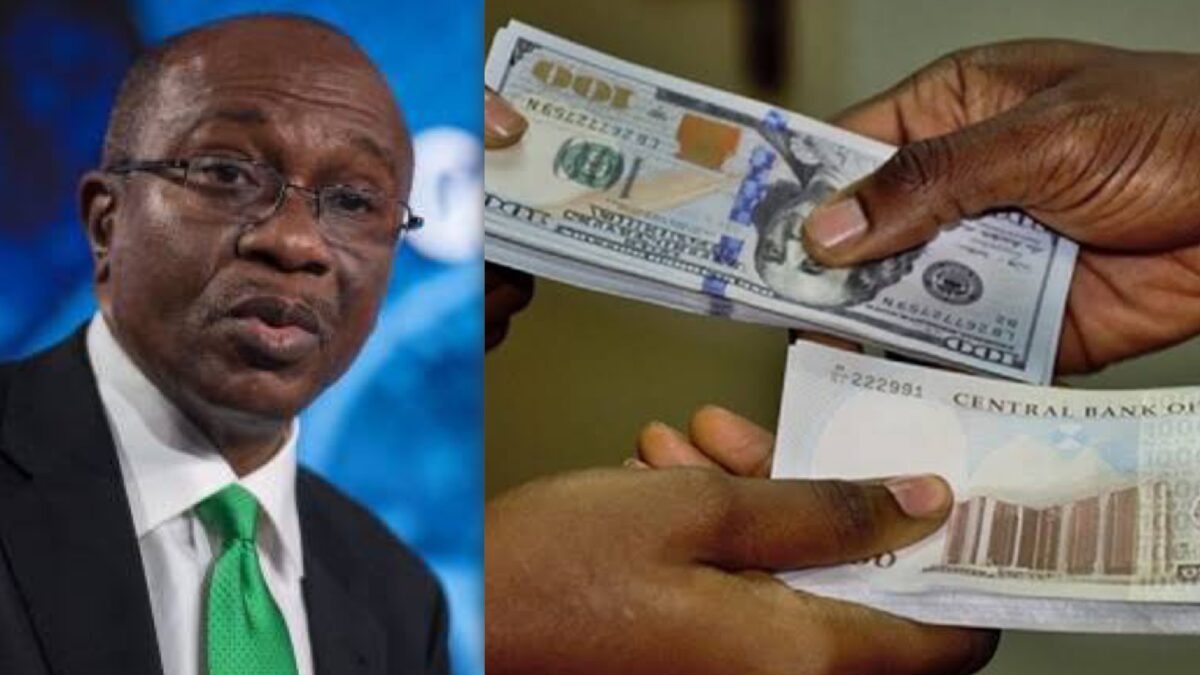 Composite of Godwin Emefiele, Naira/Dollar used to illustrate the story

The naira on Tuesday depreciated against the dollar at the Investors and Exporters window, exchanging at N430.67.

The figure represented a decrease of 0.42 per cent compared with the N428.88 it exchanged for the dollar on Monday.

The open indicative rate closed at N427.75 to the dollar on Tuesday.

An exchange rate of N444 to the dollar was the highest rate recorded within the day’s trading before it settled at N430.67

The naira sold for as low as N415 to the dollar within the day’s trading.

A total of 158.68 million dollars was traded in foreign exchange at the official Investors and Exporters’ window on Tuesday.

Meanwhile, some financial experts have described as ‘worrisome’ the unwholesome depreciation of the nation’s currency.

They urged the federal government to save the local currency by addressing the rising inflation and other causative factors.

The experts said that the persistent fall experienced by the nation’s currency due to the rising inflation had reduced its purchasing power and made people lose confidence in the domestic currency.

Uche Uwaleke, a Professor of Capital Market, urged the Central Bank of Nigeria (CBN) to deal with the inflation challenge driven largely by cost-push factors.

“Ensuring availability of petroleum products by decentralising refining, encouraging modular refineries and privatising government refineries. This will reduce the huge foreign exchange that is spent on fuel imports,” he said.

Mr Uwaleke also enjoined the apex bank to scale up its development finance interventions in agriculture and MSMEs after a thorough evaluation of existing ones in order to boost non-oil exports.

He urged the CBN to work with other stakeholders such as the Nigeria Ports Authority and customs, among others to accelerate the implementation of the RT $200 billion programme.

He said: “Given that the surge in demand is largely speculative, the CBN can quickly restore confidence and allay fears by increasing the level of interventions in the foreign exchange market in view of the relatively huge external reserves (about $40 billion) at its disposal.”

He enjoined the National Assembly to make a law that would prohibit public office holders from sending their children/wards abroad for education in order to conserve foreign exchange.

Also, Sheriffdeen Tella, a Professor of Economics at the Olabisi Onabanjo University, Ago-Iwoye, Ogun, said to salvage the local currency, “we have to stop payment for imports till we are sure of what we are paying for.

“Nobody should be allowed to pay for local items in foreign currencies like paying local footballers in dollars for winning local leagues,” Tella said.

Ndubisi Nwokoma, Director, Centre for Economic Policy Analysis and Research (CEPAR), stressed the need to minimise political interference in the allocation of foreign exchange and deal directly with the end-users to address the free fall of the Naira.

Mr Nwokoma said that the government must address the issue of oil theft by ensuring that all oil export proceeds were remitted to the CBN.

He also stressed the need to stimulate non-oil exports and discourage use of dollars in electioneering.