“We cannot afford to be disgraced in the red chambers of Abuja, please stop her thirst for the seat now for your good image.” 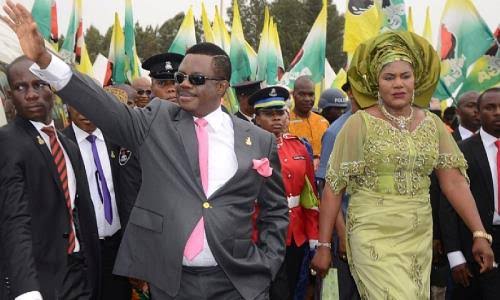 Immediate past governor of Anambra State, Willie Obiano, has been advised to discourage his wife from joining politics, following an embarrassing brawl during the inauguration of new Anambra governor on Thursday.

Chris Elunmuno, former president of Ohaneze Ndigbo in Anambra gave the advice on Thursday in Awka. He said the advice, if heeded, would protect Mr Obiano’s legacies from “shameful outings.”

“We saw the video clip all over the social media, it was a loss of dignity and this behaviour needs to be checked before she gets off hand outside Nigeria’s shores,” Mr Elunmuno said to a NAN reporter who sampled opinion of the residents on the ugly brawl between Mrs Obiano and Bianca Ojukwu, during the inauguration Charles Souldo as the sixth governor of the strategic South-East state.

He said that the fight that erupted between Mr Obiano’s wife, Ebelechukwu, and the wife of the war-lord Chukwuemeka Odimegwu-Ojukwu, was a bad end to his eight years in office as governor of the state.

“Our outgone governor’s wife lost her temper in the day of her glory and spoilt the mood of her husband and entire Anambra people by confronting a guest in a state event as huge as inauguration.

“How can she walk up to the wife of the supreme leader of the party that gave her limelight to fight his widow. It will be difficult to clean up the memory from the people’s mind, instead of celebrating her husband it is her fight that is the talk of the world,” he said.

He said that since her temperament is too short, it is not wise to allow her to go into politics to avoid further damage to the personality of Mr Obiano, his family and the entire Anambra.

“She has shown interest to contest for a senatorial seat of Anambra North in next general election. We cannot afford to be disgraced in the red chambers of Abuja, please stop her thirst for the seat now for your good image,” he advised.

Felix Akaso, a resident, described the incident as bad, saying a public personality should learn how to control his/her temper either at home or in public as maturity should be applied at all times.

Rose Mbachi, a citizen of Anambra and a school proprietress, described the incident as a wrong display of character as young adults will see it as normal and urged women to always display maturity even when provoked.

Mrs Mbachi said that the ceremony is supposed to have been held in a friendly environment where aggrieved persons could amend any broken relationship.

Patty Anagor described the incident as a bad lamp to young girls and advised that adults should be mindful of their actions not to mislead young minds.