The accompanying body camera uses 4G technology via Globacom and a supported backend by Galaxy backbone via an Internet Protocol (IP) address for network setup. 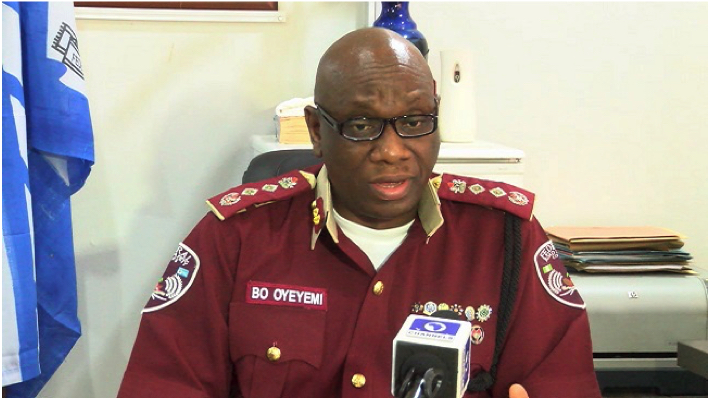 At the official inauguration in Abuja, Mr Oyeyemi said that the platform would improve transparency and accountability in the activities of the corps nationwide.

He added that it was designed with the needs for the public uppermost in mind, as the corps goes about the task of making FRSC more responsive in operations.

Mr Oyeyemi also said that it was evidence of a fostered innovation to tackle challenges in patrol operations and its strong commitment to surmount all obstacles in delivering on its mandate.

According to him, the platform was significant, due to its multiplier values to the corps and by extension, national security.

“This platform will embrace the ethical imperatives of eliminating misconducts both on the part of the operatives and motorists.

“It will considerably reduce the incentive to infringe on traffic laws and regulations due to perceived weak enforcement and likelihood of escaping arrest.

Similarly, “it will assist to improve on road safety management generally with better personnel disposition, among others,” he said.

The FRSC boss said that the corps recorded the highest cases of assaults on its personnel in 2019, but that it has not recorded a single assault since the test running of the platform began in some parts of the country.

Mr Oyeyemi added that its implementation would be in phases, as the corps had targeted three years for all the patrol teams to be using the body cameras nationwide.

“This is Phase One which is in FCT, Abuja. Cameras will be deployed to Lagos and Asaba for end of the year patrol operations as well. This will also help to control the behavior of officers and conduct of the public,” he said.

The Secretary to the Government of the Federation (SGF) Boss Mustapha, represented by the Permanent Secretary, General Services Office, Nnamdi Mbaeri, commended the corps for the laudable achievement.

He added that the development would help in strengthening better road safety management in the country, urging the corps to ensure it was extended to all parts of the country.

Mr Mustapha reiterated President Muhammadu Buhari’s commitment to the provision of transportation infrastructure a key determinant of performance in the sector.

He encouraged other agencies of the federal government to develop similar innovative ways to improve their work process in the most cost-effective manner possible.

“It is therefore, my hope that today’s inauguration of Operations Monitoring and Control Platform and deployment of the body cameras will improve the quality of road safety management approach in Nigeria,” he said.

The FCT Minister, Muhammad Bello, said that the deployment of technology for traffic law enforcement had become inevitable.

Represented by the Permanent Secretary, FCT, Olusade Adesola, the minister said that the application of body cameras had been used to great advantage by law enforcement agencies in other climes.

“I commend the FRSC for this innovation that will add great value to road safety management practice in Nigeria and the FCT in particular.

“The FCTA will continue to sustain these collaborative activities with the FRSC as we strive to build a world class transportation infrastructure befitting the capital city of our country,” he said.

Other sister agencies present, such as the Police, DSS, NSA, among others, pledged their continuous support and synergy with the FRSC.

The accompanying body camera uses 4G technology via Globacom and a supported backend by Galaxy backbone via an Internet Protocol (IP) address for network setup.