The policeman was killed in Umanu junction in Nsukka while the police patrol vehicle was set ablaze along Ibeagwa-Ani road in the area. 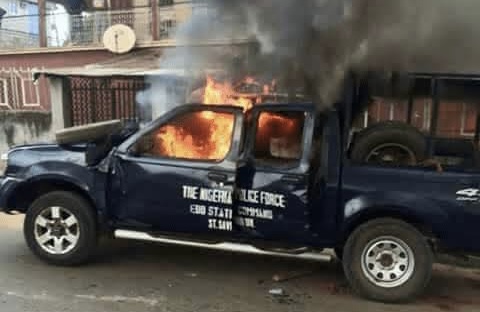 Gunmen on Friday killed a policeman and set ablaze patrol vehicles in two different police checkpoints in the Nsukka area of Enugu State.

The policeman was killed in Umanu junction in Nsukka while the police patrol vehicle was set ablaze along Ibeagwa-Ani road in the area.

A witness in Umanu junction who pleaded anonymity told NAN in Nsukka on Friday sporadic shots were heard in the area around 6:20 a.m.

“I quickly rushed to my doors to ensure that all of them were well locked.

“I switched off all electric lights in my house and told my wife and children to keep quiet because I thought it was armed robbers,” he said.

He said after the gunshots stopped, he joined people rushing to the junction and found the lifeless body of the policeman on the ground.

“They said the policeman was killed during a gun duel between the police team on the checkpoint and the gunmen,” he said.

A trader, who was a witness at the Ibeagwa-Ani Road incident where police van was set ablaze said that he was in a commercial bus going to Nkwo Ibeagwa-Ani Market when they sighted police van on fire with five armed men who masked their faces watching the vehicle.

“Our driver quickly reversed and drove to a safer distance where we watched until the gunmen zoomed off shooting sporadically.

“When we reached the scene of the incident the van had already burnt to ashes, we stopped like other road users for some  minutes and continued our journey,” he said.

“Yes, there was an attack on police operatives in Nsukka today.

“But the details are still sketchy. I will communicate with you once I get details, please,” Mr Ndukwe said.