In what appears to have been a failed mission, gunmen had attacked the Okuta Elerinla police station in Ondo, killing one officer. 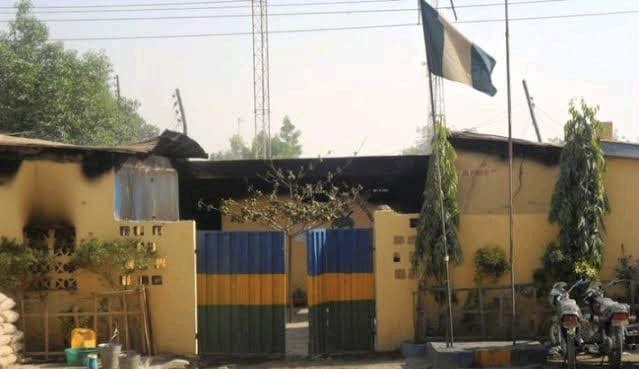 Fresh facts have emerged over the attack on the Okuta Elerinla police station in Ondo by suspected armed men in the early hours of Monday.

Peoples Gazette had reported how the hoodlums stormed the station in a midnight raid, shooting sporadically at the officers in a gun duel and killing one.

When The Gazette reporter visited the police station on Monday afternoon, officers and residents of the area were seen discussing the attack in hush tones, with some of the officers heard muttering supplications to the Almighty for sparing their lives.

One of the sources who craved anonymity, told our reporter that the attackers during the raid, tried to force their way into the armoury session of the station.

He said that the gunmen stormed the station around 1:00 a.m. and were able to scale the perimeter fence unnoticed because everyone was asleep and “There was no electricity.”

The source said that the officers on duty managed to engage them in a gun battle.

“I know that their mission was to cart away the firearms in the armoury of the station because there are no high-profile offenders in the cell.

“The detainees in the cells are mostly females who committed minor offences and are awaiting prosecution; they were moved to safety,” he added.

The police have identified the officer killed by the armed men as Inspector Temenu Boluwaji.

In a statement earlier issued by Funmilayo Odunlami, its spokesperson in the state, the police said the slain officer died on his way to the hospital.

The Commissioner of Police in the State, Oyediran Oyeyemi, has ordered an investigation into the attack.

Residents of Ondo have condemned the attack on the police station, with many expressing fears over the continuous attack on public facilities in the state.

The latest attack came barely a month that terrorists invaded the St. Francis Xavier Catholic Church, at Owa-luwa in Owo, killing over forty persons and injuring dozens of worshippers.