State officials blamed the community for encroaching on the hippos territories to plant their crops. 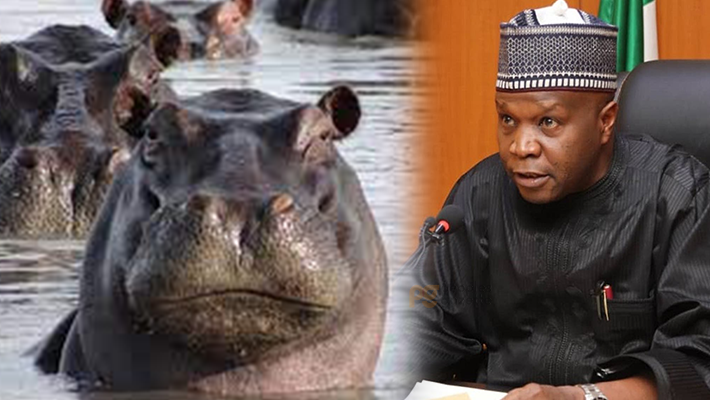 The people of Kupto village in Funakaye Local Government Area (LGA), of Gombe State, are living in awe of the dreaded herbivorous mammal, Hippopotamus, that has been ravaging their farms.

Adamu Sambo, a chief in the community, raised alarm over the threat of the animal when he spoke with the News Agency of Nigeria (NAN) in Kupto, on Thursday.

Mr Sambo said the dreaded animal had been terrorising the people and destroying crops on farmlands.

The village leader said the hippopotamus usually come out at night, or early hours of the morning when the environment is quiet, to “wreak havoc on farmlands and destroy crops.’’

He said the situation had made farmers resort to sleeping on their farms to keep guard and prevent the animal from damaging their crops.

“The dreaded animals usually come out in hundreds, destroying virtually every crop cultivated.

“We do not want to take the law into our hands because we have been informed that hippopotamus are among endangered species and are protected by law,” he said.

He said that dry season farmers in the area were already counting their losses as the attacks had led to poor harvest and subsequently low income for them.

Mr Sambo said though the community had not made an official report to the relevant authorities, it was, however, “now calling on the government to come to our aid.”

NAN gathered that most farmers from other communities, particularly rice farmers, have similar experiences.

Reacting to the issue, Inuwa Ahmed, Director Forestry and Wildlife Gombe State Ministry of Environment and Forest Resources, said the ministry was aware of the hippos attack on Kupto farmlands.

“There must be destruction by those Hippopotami; so the farmers should have given some distance from the river banks to plant their crops.

“We have earlier informed the farmers that Hippopotami are nocturnal animals, they feed at night, so if you plant in their territory, definitely there will be destruction,” he explained.

Mr Ahmed said there would be a solution to the matter soon as an expert on managing hippopotamus from the UK, would be coming in September to take census of the hippos and educate the communities on how best to interact with the animals.