I denied #LekkiMassacre based on my military ‘oath of allegiance’: Gen. Enenche

Mr Enenche maintains that everyone who intervened on the vexed #LekkiMassacre issue did so based on information available to them. 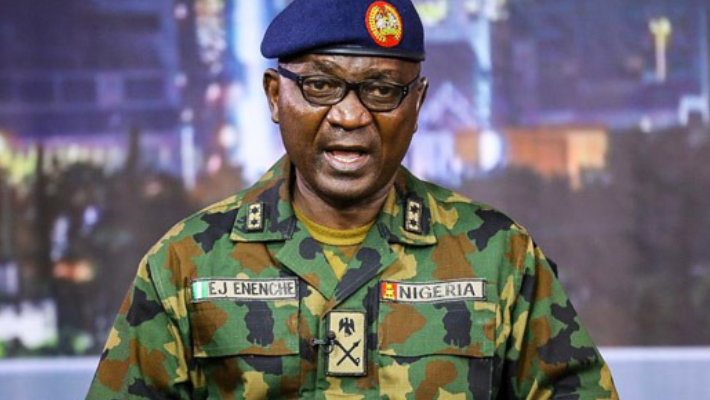 Following calls for his removal from Labour Party presidential campaign council, General John Enenche has sought to clarify his action   in denying #LekkiMassacre during his time as Director of Defence Information.

Mr Enenche, a retired Major-General, in a statement released Friday night said his actions as former military spokesman were guided by “overriding interest of Nigerians at heart based on the oath of allegiance I swore on commission into military service.”

The inclusion of Mr Enenche in the list of a 1,234-member strong campaign council for the Peter Obi-Yusuf Datti presidential campaign for the 2023 elections elicited wide condemnation from supporters who feel offended by Mr Enenche’s intervention in the aftermath of the Lekki Tollgate incident.

On October 20, 2020, Nigerian soldiers opened fire on unarmed #EndSARS campaigners who converged on the Lekki Tollgate to demand an end to police brutality mainly perpetrated by the defunct police Special Anti-Robbery Squad. Many demonstrators were reportedly killed by state agents while sitting on the floor, singing the national anthem and waving the Nigerian flag.

The federal and Lagos government continue to deny fatalities from the unwarranted military intervention. Mr Enenche, in the heat of the controversy, also suggested that a live footage broadcast by DJ Switch, a protester at the scene on that fateful night, was “photoshopped.”

Many #EndSARS protesters who are now the major drivers of the Peter Obi presidential campaign became agitated upon learning of Mr Enenche’s inclusion in their current cause.

But Mr Enenche maintains that everyone who intervened on the vexed #LekkiMassacre issue did so based on information available to them.

“Following my appointment on the campaign council of Labour Party, there were reactions on the social media about my pronouncement concerning a video shot at the scene of the ENDARS incident at Lekki toll gate on 20 October 2020,” Mr Enenche said.

“Every one that commented in any way was right based on the information at their disposal and individual analysis. Personally and professionally, I worked with the overriding interest of Nigerians at heart based on the oath of allegiance I swore on commission into military service which is sacrosanct. I sincerely shared in the pains of that breaking news through the social media as it were,” he added.

Already, Mr Obi has hinted that the concerns of his supporters would be addressed and all “omissions and erroneous entries” will be corrected by the party.

Yet, Mr Enenche says he remained unflinching in his support for Mr Obi and Yusuf Datti Baba-Ahmed, his running mate, who he has known for 17 and five years, respectively.

“I made bold to openly and objectively support the candidature of HE Mr Peter Obi and Dr Yusuf Ahmed-Datti without fear or contraction. All based on my knowledge of the duo for about 17 years and 5 years respectively, that they can provide quality leadership for the Nation that will guarantee effective followership,” he said.