Mr Pantami’s call to Jihad and unalloyed support for murderous groups portray him as a dyed-in-the-wool Islamic fundamentalist. 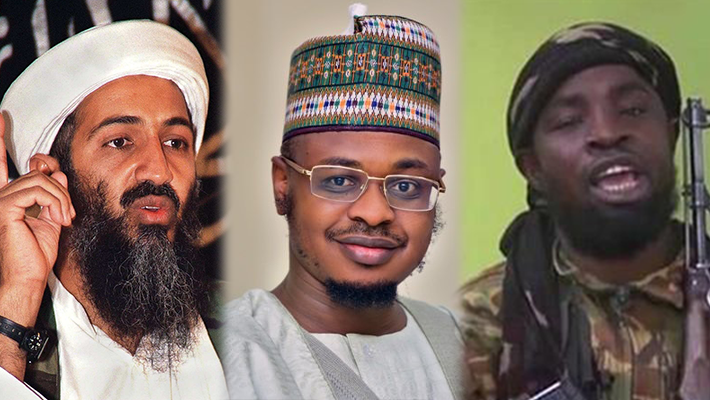 Though Nigeria’s Minister of Communications and Digital Economy Isa Pantami denounces any allegiance to Boko Haram, he expressed support for the global extremist groups — the Taliban and Al-Qaeda.

“This jihad is an obligation for every single believer, especially in Nigeria,’’ Mr Pantami said in one of his vicious sermons in the 2000s. “Oh God, give victory to the Taliban and to al-Qaeda (Allahumma’ nṣur Ṭālibān wa-tanẓīm al Qā‘ida).”

Mr Pantami’s call to Jihad and unalloyed support for murderous groups portray him as a dyed-in-the-wool Islamic fundamentalist. Yet, President Muhammadu Buhari appointed Mr Pantami as communications minister to control the country’s massive data and telephone infrastructure and other sensitive details of national intelligence.

When contacted on Wednesday by Peoples Gazette regarding his support for the terrorist groups, the minister did not comment.

On Monday, Mr Pantami threatened to sue some media platforms for reporting that he is on the U.S. terror watchlist for supporting Boko Haram.

The minister had claimed on Twitter that his lectures “against the doctrines and all other evil people (terrorists) have been available for over 15 years, including debates that endangered my life against many criminals in Nigeria.”

But he failed to acknowledge that he is an avowed supporter of the Taliban and Al-Qaeda, as revealed in a 2019 academic document ‘Debating Boko Haram’ seen by The Gazette.

Mr Pantami invited Muslims, especially “Ahlus Sunna” (Salafis), to be sceptical of politicians and religious leaders calling for peace and understanding but retaliate with jihad.

“This jihad is an obligation for every single believer, especially in Nigeria (hādhā jihād farḍ ‘ayn ‘ala kull muslim wa-khuṣūṣan fī Nījīriyā),” he added. Mr Pantami’s comments were translated by Professor Andrea Brigaglia, an African expert at Naples University in Italy. Nigerian scholar Musa Ibrahim of the University of Florida in the United States contributed to the paper that explored the onset of Boko Haram in Nigeria.

Top journal publisher academia.edu published the research in March 2019, several months before Mr Buhari tapped Mr Pantami as a minister. Mr Pantami’s violent preachings, which he rendered in Hausa and Arabic throughout the late 1990s and early to mid-2000s, had gone largely unreported in the Nigerian mainstream media.

The document detailed how Mr Pantami offered himself as a volunteer to mobilise the Hisba police of the North, requesting to be appointed as the “commander” (kwamanda) of a militia (ready to travel to Yelwa Shendam) to fight in defence of the Muslims.

The speech, which is about 20 minutes long, concluded with the prayer, “Oh God, give victory to the Taliban and to al-Qaeda (Allahumma’ nṣur Ṭālibān wa-tanẓīm alQā‘ida).”

“During his speech, Pantami is in tears, and his voice is often broken by sighs. The genuineness of his emotional response to what was, without doubt, a dramatic episode in the history of violent conflict in Plateau state is obvious,” said the report.

In a second speech, delivered in 2006, Mr Pantami offered his public condolences for the death of the leader of Al-Qaeda in Iraq, al-Zarqawi.

“He was born in 1966 of the Christian era, that is forty years ago. […] After some time, he was given responsibility for a camp in Herat. It was the Commander of the Faithful (Amīr almu’minīn) Mollah Omar ‒ may God preserve him ‒ who personally gave him the authority to run this camp.”

The document noted Mr Pantami as further saying, “To this date, in the community of the Prophet we have some awesome people, people of awesome faith, who follow the creed of the Sunna and thanks to whom the enemies of God are unable to find rest in this world.

“They have killed the Shaykh, the martyr Abdallah Yusuf Azzam ‒ may God have mercy on him ‒ but did the struggle end? They went on to strike Chechnya, and they killed many of them: did it end? […] Whenever one goes, another one comes, and he is even more awesome than the first,” Mr Pantami added.

In 2012, former President Goodluck Jonathan made a veiled reference to the fact that terrorists and their sympathisers had infiltrated his government. Boko Haram and other terror groups in the country have continued to terrorise Nigerians by the wanton destruction of lives and property.