The president’s chief of staff, police inspector-general and director-general of SSS were absent reportedly due to bad weather. 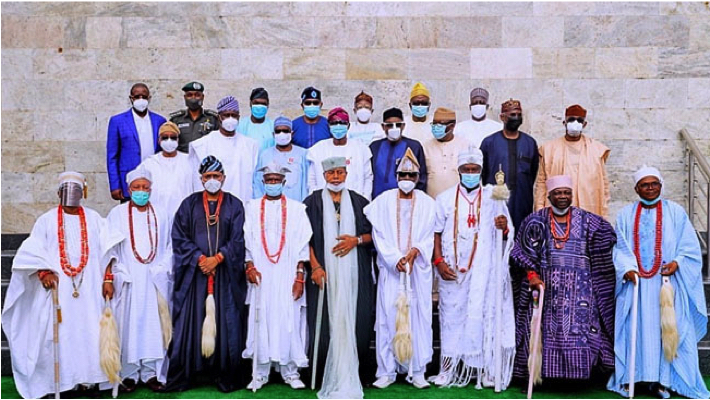 Governors in the South-West and some first class traditional rulers in the zone have met in Ibadan, Oyo, to address the security challenges in the region and other parts of the country.

The News Agency of Nigeria (NAN) reports that the meeting which started at about 3 p.m. on Saturday was held at the executive chamber, office of the governor, state secretariat, Agodi, in Ibadan.

Among the traditional rulers at the meeting were the Alaafin of Oyo, Lamidi Adeyemi; Ooni of Ife, Enitan Ogunwusi; Akarigbo of Remo, Babatunde Ajayi; Olugbo of Ugbo kingdom, Fedrick Akinrutan; Olubadan of Ibadan, Saliu Adetunji and Olugbon of Orilegbon, Francis Alao.

The Deputy Inspector-General of Police, incharge of  South-West, David Folawuyo, Oyo State Commissioner of Police Ngozi Onadeko and other heads of security agencies in Oyo state were also in attendance.

NAN learnt that the Chief of Staff to President Muhammadu Buhari, Ibrahim Gambari; Inspector-General of Police Mohammed Adamu and the Director-General of the DSS, Yusuf Bishi could not make the journey to attend the meeting due to bad weather.

It was expected that the chairman of the Southwest governors’ forum Gov. Akeredolu would brief reporters at the end of the meeting.