The opposition had touted the exercise as a harbinger of the 2023 general elections, in which Nigerians face the question of whether to remove or retain the party in power. 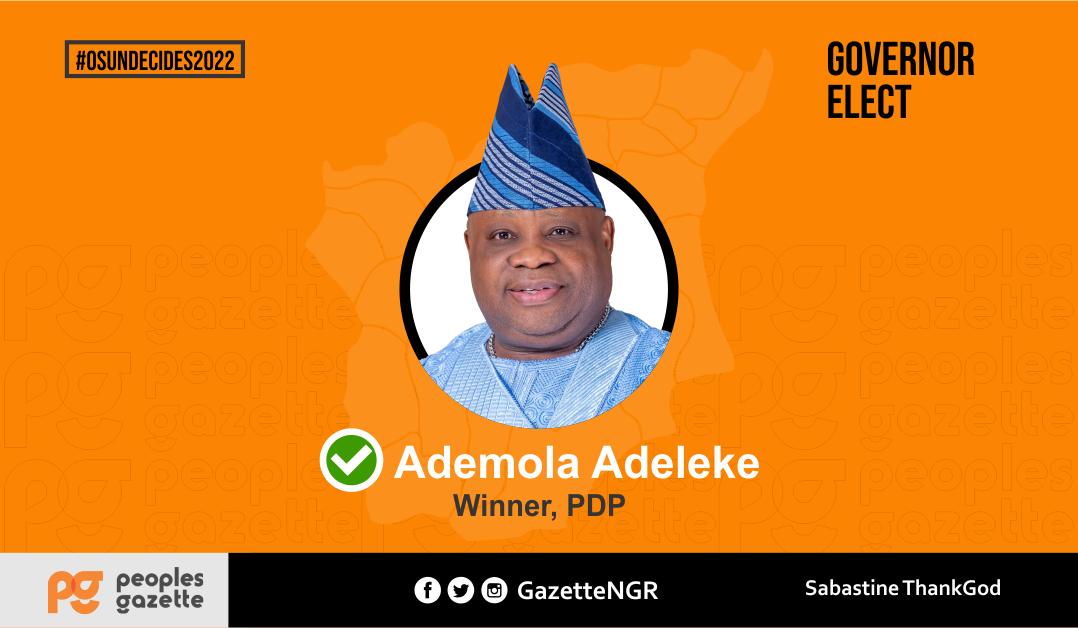 Ademola Adeleke of the Peoples Democratic Party has emerged victorious in Osun’s governorship elections, defeating Governor Gboyega Oyetola of the All Progressives Congress.

The results announced by the Independent National Electoral Commission registered that out of the votes counted across the state, Mr Adeleke received 403,371, unseating the incumbent, who scored 375,027 votes. Labour Party scored 2,729 votes.

As observed by Peoples Gazette reporters, Mr Adeleke’s good showing had been apparent throughout voting hours across the southwestern state on Saturday. Find a good chunk of results from polling units and ward areas here.

The Gazette had reported Mr Adeleke’s win at Osogbo Local Government Area, receiving 30,401 votes out of the total 54,997 cast votes, while Mr Oyetola garnered 22,952 votes. He also made inroads into other opposition strongholds, including in Ile-Ife, where he pulled a surprise in Ife North Local Government Area.

The candidate’s victory was also buttressed by the inability of the ruling APC to garner as many votes as it anticipated from Iyiola Omisore’s stronghold in Ile-Ife. Mr Omisore used his popularity in Ile-Ife to deliver a slim victory for Mr Oyetola in 2018 after his third-party candidacy forced a run-off between the APC and PDP.

The opposition had touted the exercise as a harbinger of the 2023 general elections, in which Nigerians faced the question of whether to remove or retain the party in power.

The ruling APC had downplayed expectations about the message Nigerians are likely to hold from the election’s outcome, saying it should not be seen as a referendum on its overall popularity, which it maintained was growing.

Mr Adeleke, a former senator who was the PDP’s governorship candidate in the 2018 cycle, emerged as the party’s guber choice on March 10 after slugging it out with Dotun Babayemi.

Messrs Adeleke and Oyetola had sought the job in 2018. The election was initially declared inconclusive by INEC, and a rerun was slated on 27 September 2018. Mr Oyetola was declared the winner after the run-off. At the final count, Mr Adeleke polled 255,023, losing with less than 500 votes to Mr Oyetola, who scored 255,505 and was returned elected.

Mr Adeleke challenged the result as fraught with irregularities and ruling party tampering, but the Supreme Court affirmed Mr Oyetola’s victory on July 5, 2019.