Earlier this month, the government crushed about 2,000 impounded motorcycles in line with its ban on Okada riders in the state. 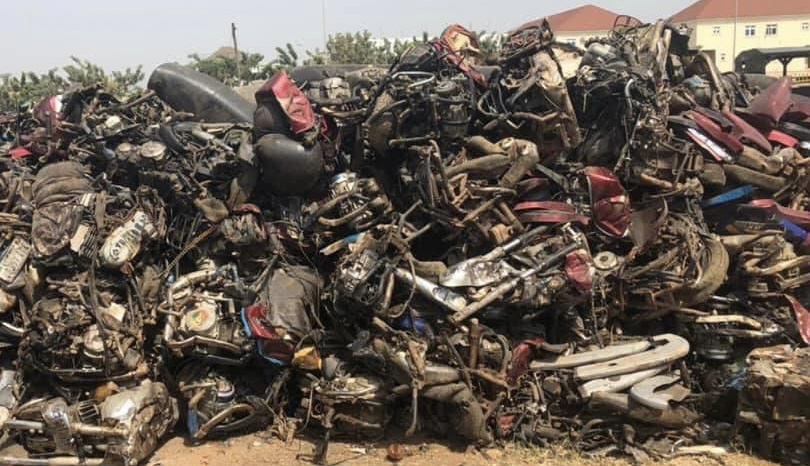 The Lagos State government says it has concluded plans to crush 250 commercial motorcycles, popularly known as okada, including power and dispatch bikes seized for contravening the state traffic laws.

“The bikes seized by the Agency, numbering 250, will be crushed over the weekend at the Taskforce crushing site in Alausa,” it said.

Gbadeyan Abdulraheem, a spokesperson for the Lagos State Taskforce on Environmental and Other Offences, disclosed this in a statement on Tuesday.

“We have made a series of arrests, including dispatch bikes whose riders either convey passengers, even with the delivery box still mounted or sometimes disassemble the box and convey the passengers with the bikes.

“Unfortunately, some of the owners of these bikes do not know that their bikes have been confiscated because the riders usually abandon the bikes once apprehended by our officers,” Mr Abdulraheem said.

He urged all dispatch and delivery bike operators to lecture their riders to desist from carrying passengers to avoid the risk of forfeiting the bikes to the state government.

Mr Abdulraheem said that the agency had also descended on those using power bikes to break traffic rules.

“Riding a power bike doesn’t make you immune to traffic laws of the state, especially when it has to do with riding against traffic on one-way, which is highly dangerous to road users and even pedestrians.

“Any motorbike violating the state traffic laws will be met with the same level of punishment as the commercial motorcycles of lower capacity,” he said.

Earlier this month, the government crushed about 2,000 impounded motorcycles in line with its ban on motorcycle “Okada” operations in the state.