The affected section of the market hosts clothes and bag sellers. 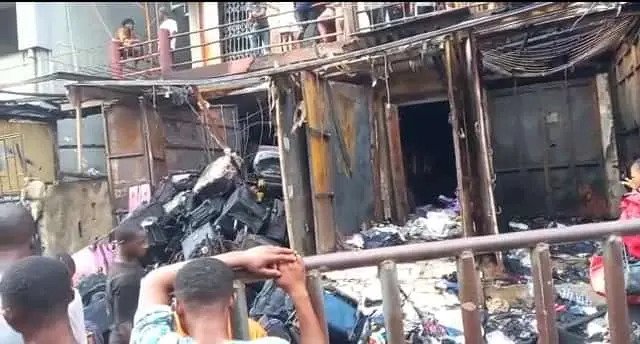 Balogun market in Lagos was razed by fire on Thursday morning, destroying properties worth millions of naira.

Traders affected by the inferno are said to be distressed over the loss of their goods and properties destroyed by the fire.

The section of the market hosting clothes and bag sellers was razed by a midnight fire, nine-days before Christmas.

The fire broke out from one of the shops in the market, however, the cause of the fire outbreak has not been ascertained.

Adeseye Margaret, the Director of Lagos State Fire and Rescue Service, said the agency got a distress call on the market fire attend at about 5:50 am. and promptly moved in.

“The Fire which involved only three shops at the ground floor from among 56 shops in the three storey plaza was met well alight and extinguished from escalating to adjoining structures in the bostorious Lagos market,” she said.

“It is on record that the Fire has completely been put out at 0740 hours with a combined efforts of the Federal Fire Service as investigation into the cause is ongoing while no casualty was recorded.”

When contacted, a spokesman for Lagos State Emergency Management Agency, Yemi Sule, said he has not receive any brief about the fire incident.

On Monday, Computer Village, an electronic market in Lagos was razed by the fire.

The fire broke out from a shopping complex on Otigba Street, Computer Village, Ikeja.