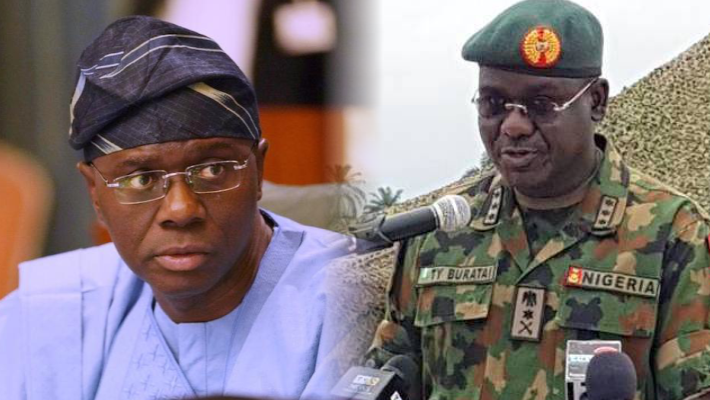 The Nigerian Army on Saturday told the Lagos Judicial Panel of Inquiry and Restitution for Victims of SARS Related Abuses and Other Matters that they are displeased with the Lagos State Governor, Babajide Sanwo-Olu on two grounds.

The Nigerian Army made the remarks  while presenting thier testimony on their alleged shooting of unarmed #EndSARS protesters at the Lekki tollgate.

Army general Ahmed Taiwo said the military was unhappy with the governor due to utterances he made in the aftermath of the #EndSARS mayhem.

“The Nigerian Army is unhappy with the governor over two things. The first instance is the denial that he asked us to intervene.

“He had called the Chief of Army Staff Tukur Buratai and the General Officer Commanding after asking the Commander 9th Brigade to intervene, but the Commander could not intervene because procedure was not followed.

“The Commander 9th Brigade asked him to call the COAS and the GOC, Maj.-Gen Uwem, but the governor did not have the GOC’s number and neither did the GOC have the governor’s number.

“The GOC was on assignment in Abuja and saw a number of missed calls from an unknown number, and when he called back, they were able to speak at some point; but he had called the COAS,” he said.

He said that phase four was necessary because Lagos had already descended into chaos with blocking of major highways by hoodlums, the looting of businesses, destruction of police stations and the killing of policemen.

“The second instance is when the governor said two people died and he said one person died in Admiralty Road due to blunt force trauma.

“Admiralty Road is about three kilometers from that place (Lekki Tollgate). He said they saw the police brought in a body to the mortuary in Yaba, Lagos. The distance from Lekki to Yaba is far,” he said.