Ms Bass, 69, is the first woman and second black mayor to lead the U.S. second largest city winning 53 per cent of votes in an historically tight contest. 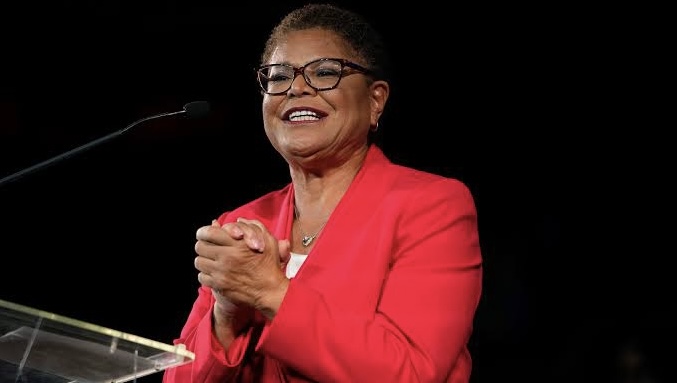 The city of Los Angeles has elected social worker and veteran congress woman, Karen Bass, as its first female mayor.

Ms Bass, 69, is the first woman and second black mayor to lead the U.S. second largest city winning 53 per cent of votes in an historically tight contest between her and billionaire real estate developer, Rick Caruso.

Ms Bass during her campaign promised to urgently address a wide spread crisis which has gone out of control as well as rising crime rates as well as restore trust in government by addressing multiple scandals that have shaken people’s trust.

In a statement after her win was announced by the Associated Press, Ms Baren said: “Now, it’s time to get to work and move our city in a new direction. It’s time to house people immediately, increase safety and opportunity in every neighborhood, and create a new standard of ethics and accountability at City Hall.”

“Her (Ms Bass) victory sends a clear message about the kind of Los Angeles we want and see for ourselves.”

“We’ve always said this race is about the soul of Los Angeles and voters clearly spoke up to reject an attempt to buy this race. I’m thrilled to congratulate Mayor-elect Karen Bass and know she and her team will quickly dive in with the kind of vision we need to keep progressing toward a future of inclusivity, equity and purpose.”

Ms Bass’ election is another step forward for women in leadership in her hometown, as she joins an increasingly female lineup of local leaders, including the city’s first female city attorney and the county’s powerful, five-member Board of Supervisors, which is dominated by women.