This action by qualifies Mr Malami for arrest and prosecution, going by his directive. 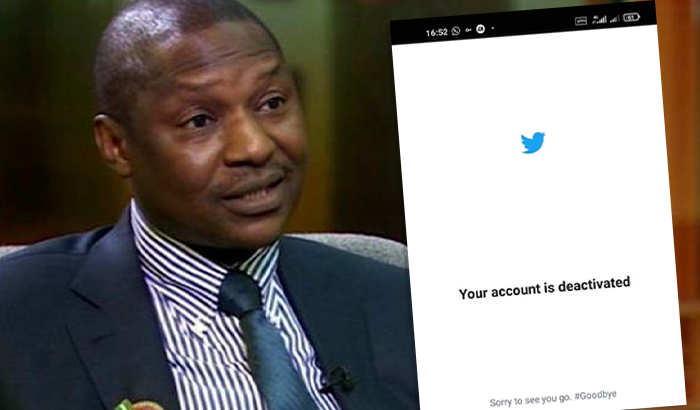 A photo of Malami and screenshot used to illustrate the story

The Nigerian government last week Friday banned Twitter, blocking citizens’ access to the micro-blogging platform after Mr Buhari’s tweet, deemed a threat to commit genocide in the fashion of the civil war genocide against the South-East people was deleted by Twitter.

On Saturday afternoon, Mr Malami doubled down on government’s action by issuing a directive for the prosecution of Nigerians seen bypassing the government’s order.

Peoples Gazette, however, observed that Mr Malami deactivated his account on Tuesday, an action that requires one to first login to the micro-blogging site to do.

This action qualifies Mr Malami for arrest and prosecution, going by his directive.

Since the declaration of Twitter ban, Nigerians have condemned the action as draconian and illegal.

Many citizens continue to defy the government to use the micro-blogging platform.

Many activists and foreign missions in Nigeria say Twitter ban is an attack on the freedom of expression in Nigeria by the Buhari regime.

Before now, the Buhari-led government has been scheming to gag the free speech through an obnoxious social media Bill which continues to encounter pushbacks from Nigerians.