However, there are conflicting figures on the number of casualties involved in the Tuesday tragedy. 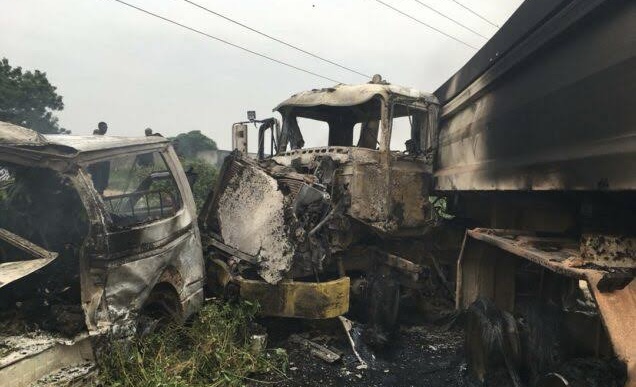 Several people were feared dead in a fatal road accident at Alarm City in the Epe area of Lagos State.

However, there are conflicting figures on the number of casualties involved in the Tuesday tragedy.

He noted that the accident involving a white bus with registration number KTN 262YJ and an articulated truck occurred around 03:00 a.m. on Tuesday.

“The crash occurred at 0300hrs due to impaired visibility as a result of reckless driving within the construction corridor,” he said.

Meanwhile, LASEMA said six passengers were conveyed in a bus that rammed into a trailer, where five occupants were unfortunately burnt with the bus.

“Upon arrival of the LASEMA Response Team, LRT Whale’s Squad at Epe at the incident scene, it was revealed that a truck conveying sand had a head on collision with a hummer commuter bus with 6 passengers on board.”

“Furthermore the two vehicles got burnt as a result of the impact of the collision, unfortunately, 5 adult males (all from Katsina State) were burnt beyond recognition.”

It added that the casualties were “bagged and handed over to their relatives.”