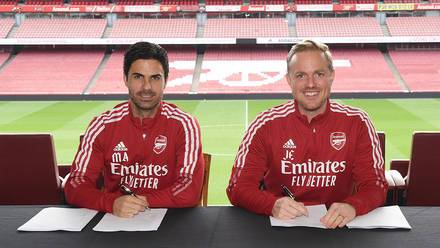 Arsenal manager Mikel Arteta has signed a new contract, the club has announced.

The new deal was announced on Arsenal FC’s website on Friday.

“We are delighted to announce that Mikel Arteta and Jonas Eidevall have signed new contracts with the club. We marked the moment with a unique double signing at Emirates Stadium,” the club statement announced.

“I’m excited, grateful and really, really happy today,” Mikel said after signing the extension, which runs until the end of season 2024/25. “When I spoke to Josh he could see the club at the same point and he wanted to take the club the way I wanted to do it. So everything that he’s said, and that Stan has said when I’ve been together with both of them, they’ve always delivered.”

Eidevall also put pen to paper on a new deal after an “impressive first season in London,” taking the Women’s Super League title challenge to the final weekend.

Jonas, “who joined us from the Swedish side Rosengard last summer, has signed a contract” to the end of the 2023/2024 season.

“It’s great,” he said. “It allows me to continue to work for a club that I love so much and be around people that I really, really like, and to be able to achieve things together, so I’m really looking forward to that.”

Josh Kroenke, speaking on behalf of the club’s owners Kroenke, Sports & Entertainment, said, “My father and I are delighted to have extended both Mikel’s and Jonas’ contracts. It provides stability and clarity for the future and helps us all move forward together effectively.”

The pair signed their deals together in the directors’ box, overlooking the pitch at Emirates Stadium, in the presence of chief executive Vinai Venkatesham, technical director Edu Gaspar and head of women’s football Clare Wheatley.