The minister’s supporters described the famous political activist as an unbeliever who hates Islam and Muslims on social media. 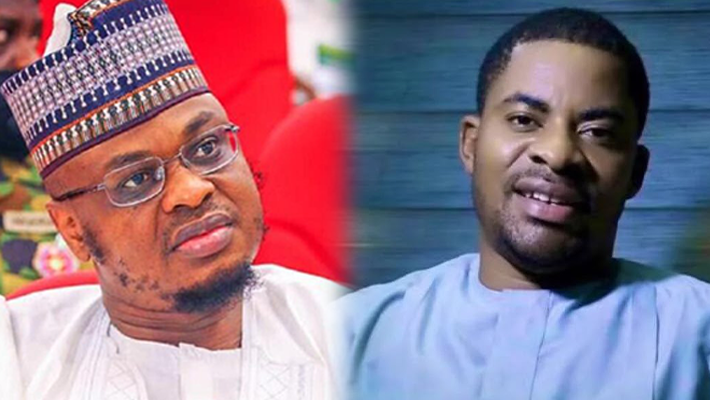 Mr Pantami’s supporters derided Mr Adeyanju as an “enemy of Islam” following his petition to the United States requesting that Mr Pantami be placed on its terrorism watchlist. Mr Adeyanju cited the minister’s support for terrorists and extremist views as too grievous to overlook.

“We write to bring to your notice numerous publications in the media about Sheik Isa Pantami, the Minister of Communications, wherein he was quoted in the past supporting major terrorist groups -Al-Qaeda and the Taliban and describing Osama Bin Laden as a hero and better Muslim than himself.

“We, therefore, call upon you in the face of his admission, to invite him for questioning with the view of prosecuting him for supporting terrorism. It will interest you to know that many Nigerians are already wondering how he passed security clearance with your agency to become a Minister of the Federal Republic of Nigeria,” Mr Adeyanju said in the April 16 letter routed via the U.S. Embassy in Abuja.

Mr Adeyanju also noted that “terrorists and their sympathisers don’t repent, they are only looking for an opportunity to get close to power so they can strike harder,” and asked the minister to resign or be sacked by President Muhammadu Buhari. The president himself has yet to comment on the matter.

However, Mr Pantami’s followers took to social media to declare the activist an “enemy of Islam” and “enemy of Nigeria’s peace” for writing a letter of complaint to the US Embassy in Abuja.

A Facebook post by one of the minister’s supporters, Datti Assalafiy, described Mr Adeyanju as an unbeliever who hates Islam and Muslims on social media.

“He is one of Nigeria’s enemies of peace that won a contract to spread the #ENDSARS crisis on social media which has cost Nigeria more than N3 trillion.

“He is the one who has now written a letter of complaint to the U.S. Embassy in Abuja, requesting that the United States place Sheikh Isa Ali Pantami on a list of people responsible for terrorist activities around the world, and that the embassy accepted his complaint,” the Facebook post said.

Mr Pantami quickly added his own curses a flurry of comments using his verified handle. The minister said in Hausa: “Allah ya tsine masa alubarika.” This was roughly translated as: “May Allah reject his blessings.”

Hundreds of Mr Pantami’s supporters have circulated Mr Adeyanju in crosshairs on social media since Sunday evening, further raining curses on him for standing against their leader.

Following widespread criticism, Mr Pantami deleted his endorsement of the fatwa and claimed his account was hacked.

“This account was hacked, just recovered it, it is not being managed by Pantami, but by some youth. Disregard any request, comment, or message from it,” the minister claimed.

But political analyst Idris Abdulbasit said Mr Pantami’s action was an endorsement of a call to kill Mr Adeyanju.

“I saw what the Alsalafiy person posted on Facebook and it was a fatwa,” Mr Aldulbasit said. “It may not have come from a religious authority in Islam but it is a call for someone to be killed.”

Fatwas were in centuries past strictly defined as a decree or ruling by an Islamic authority, especially a mufti, that may or may not be about a threat to life. Last week, a prominent Islamic body issued a fatwa that COVID-19 vaccine can be taken during Ramadan.

But fatwa’s definition has evolved in recent decades. In the mid-1990s and early 2000s, the Western media reported several calls issued by Osama Bin Laden, including ones that asked Muslims to kill Jews, Americans and other Westerners on sight, as fatwas. The late Al Qaeda was not a mufti and did not have the Islamic authority to issue the call, but it was obeyed by many of his sympathisers across the world.

When an Algerian Imam issued a call for the killing of prominent author Kamel Daoud, it was widely reported as a fatwa by Western and African media alike.

“The call may not be legitimate but that would not necessarily stop extremists from going after Deji Adeyanju,” Mr Abdulbasit said. “That is why the minister should not have endorsed it and that is why security agencies should move in to give that the activist needed protection.”

Although, the minister has apologised for his old comments and denied ties with terrorist groups, Nigerians have continued to call for his resignation, with #PantamiResignNow and #IsaPantamiMustresign trending on social media platforms.

Nigerians, however, dismissed the minister’s claim as a “pathetic lie,” with some commenters saying it further cast him as an extremist.

Commentators also warned Mr Pantami to desist from harming Mr Adeyanju, saying he would be held responsible if his supporters attack the activist.

Mr Adeyanju himself said he was unfazed by the minister’s threat and remained defiant in his call for his resignation.

“Pantami should stop threatening me with death,” Mr Adeyanju said. “He should resign and save Nigeria further disgrace before the international community.”