The EFCC, in a counter affidavit filed at the Abuja Division of the Federal High Court prayed the court to dismiss the senator’s application. 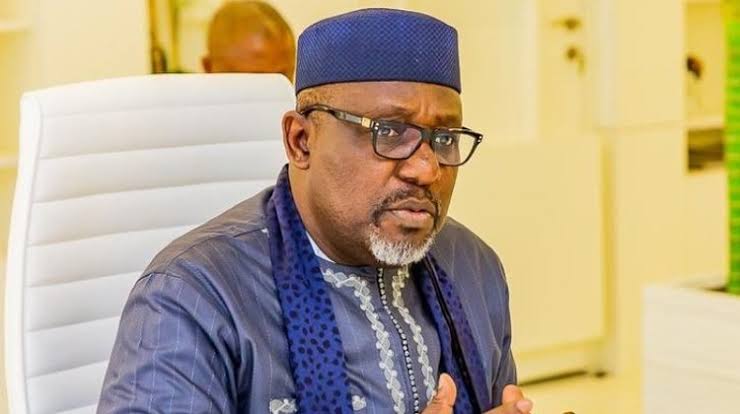 The Economic and Financial Crimes Commission (EFCC) has opposed a motion filed by Rochas Okorocha, praying for an order to quash the money laundering charge preferred against him.

The EFCC, in a counter affidavit deposed to by Iyabo Daramola, the agency’s senior legal officer, and filed before Justice Inyang Ekwo of the Abuja Division of the Federal High Court, prayed the court to dismiss the senator’s application.

In its application dated and filed on November 18, the agency said it had seen and read through Mr Okorocha’s motion dated October 28 that “the depositions therein are grossly misleading and untrue, particularly paragraphs 3 and 4.”

Mr Okorocha, who currently represents Imo West Senatorial District, in a motion on notice, marked FHC/ABJ/CR/28/22 dated and filed on October 28, had prayed for an order quashing the charge and/or all counts of the charge preferred against him as a result of the investigation by the EFCC into his activities while in office as governor of imo between 2011 and 2019.

But the EFCC alleged that sometime in 2019, it received various intelligence reports from members of the public.

It said the ex-governor was said to have conspired with the then-acting accountant general of Imo, the pay officer, the cashier and others to illegally withdraw N1 billion and N8 million from the coffers of the state government to fund the governorship and state house of assembly’s election in Imo.

It also alleged that the sum of N30 billion was embezzled and stolen from the treasury of the Imo government by Mr Okorocha under the guise of project execution and laundered through companies.

“Based on the intelligence mentioned in paragraph 5 above, officials of the respondent (EFCC) commenced an investigation, which included making inquiries from the Zenith Bank on the state’s Federal Account Allocation Committee (“FAAC”) and Joint State Local Government Account (JAAC),” it said.

The anti-corruption agency said it interviewed the signatories to the accounts; interviewed some contractors for the state; inquired from the banks with loan transactions with the state; made inquiries from the Code of Conduct Bureau, and interviewed former and present government officials.

It said the preliminary findings showed that between 2014 and 2018, N1 billion and over N8 million were transferred from the local government account of the state.

It said this was done under the guise of mobilisation for building 28 hospitals across every local government in the state through different companies, including Bureau De Change to a company which provided a lease of Learjet 45XR Aircraft for the personal use of the former governor.

The commission alleged that between January and April 2019, over N6 billion was transferred to different companies from the Imo State Joint State Local Government Project Account domiciled in Zenith Bank based on Mr Okorocha’s directives without contract documentation or evidence of contract execution.

It also alleged that over N50 billion was moved from the treasury of the Imo government under the guise of execution of projects through proxy companies and nominees during his administration, among others.

He said Mr Okorocha, upon realising that EFCC had begun the investigation, rushed to file suit number: FHC/ABJ/CS/475/19 at FHC, Abuja, and surreptitiously secured an order ex-parte to stop the investigation.

The agency challenged the suit and filed a motion alleging bias against Justice Taiwo Taiwo, who granted the ex-parte order.

It averred that while the suit marked: FHC/ABJ/CS/475/2019 was still pending, the lawmaker filed another suit number: FHC/ABJ/CS/508/20, at the Abuja FHC with the relief to stop the agency and imo government from investigating him, but the court had not made any order to stop the investigation.

The anti-graft agency said in the absence of any restraining order, it sent an invitation letter to Mr Okorocha but failed to honour it.

It said, having refused to honour its invitation, the EFCC applied and obtained an order for the senator’s arrest.

It said on April 13, 2021, Okorocha was later arrested after its operatives eventually got access to his Abuja house, where he locked himself up to resist arrest.

It said Mr Okorocha was granted administrative bail on April 15, 2021.

The EFCC said it did not violate any known law by investigating the activities of Mr Okorocha.

It also said that the Attorney-General of the Federation (AGF) and Minister of Justice Abubakar Malami, SAN, was well aware of the investigation and ongoing prosecution against him and other defendants in the case.

It argued that the judgement by Justice Pam on December 6, 2021, in Mr Okorocha’s fundamental rights suit at the Port Harcourt division of FHC was delivered without considering the EFCC’s processes duly filed.

It said that the order granted by Justice Pam “is a gagging order designed to frustrate, prevent and discourage the respondent (EFCC) from discharging its statutory functions of investigation and prosecution of economic and financial crimes.”

It added that the order was not directed at proceedings before Justice Ekwo.

The commission said it, however, filed a motion to set aside the December 6, 2021 judgement, and it was refused, necessitating the filing of a notice of appeal.

The EFCC stressed that the charge filed against the defendants, including Mr Okorocha, has three voluminous and comprehensive proof of evidence which showed the nexus of the defendants with the charges filed and the list of documentary evidence to be relied upon by the prosecution during the trial.

It said it would be in the interest of justice to refuse Mr Okorocha’s motion.

Upon resumed hearing in the matter on Monday, EFCC’s counsel, Farouk Abdullah, told the court that Ola Olanipekun, SAN, who appeared for Mr Okorocha, had just served on him a further affidavit which he would want to respond to.

Justice Ekwo, who directed all parties to regularise their processes before the next adjourned date, fixed November 25 for hearing of the preliminary objection.