Mr Agu was seen in a viral video being arrested and dragged into custody by gun-wielding soldiers at Upper Iweka Bridge in Onitsha on Thursday. 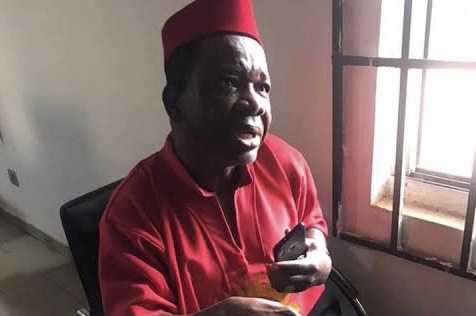 In a now viral video, Mr Agu was seen narrating his ordeal to a man who appeared to be a military commander at a barrack.

“I was buying bread, ten thousand naira bread, sharing them one one, no campaign, nothing! I was sharing bread when they came,” the actor said as he was being commandeered into an office.

The origin of the footage is not immediately clear but it appears to have been recorded by soldiers looking to humiliate the distressed thespian.

On Thursday October 7, Mr Agu was seen in another viral video being arrested and dragged into custody by gun-wielding soldiers at Upper Iweka Bridge in Onitsha.

The Nigerian Army had issued out a public statement saying the actor was arrested “while inciting members of the public and soliciting for support for the proscribed Indigenous People of Biafra”.

“This is sun, this is rising sun not Biafra, not eastern security network” Mr Agu said, debunking the bases of his arrest.

Fans and friends of the actor have taken to social media to express their outrage over Mr Agu’s arrest, terming the actions of the Nigerian Army “illegal”.