Thursday’s event seeks to immortalise the memories of unarmed citizens killed by state forces on the night of October 20, 2020 at the Lekki Tollgate. 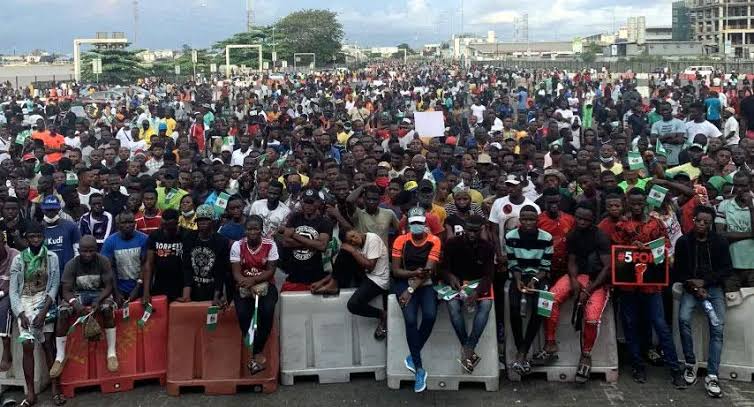 Nigerian youths including celebrities and public figures will gather at the Lekki Tollgate on Thursday to commemorate the second memorial of the #EndSARS protests.

The #EndSARS swept through the nation in two weeks of historic demonstration as thousands of youths organised and marched through major cities around the country, demanding an end to decades of police brutality and general injustice.

Thursday’s event seeks to immortalise the memories of unarmed citizens who were killed by state forces on the night of October 20, 2020 at the Lekki Tollgate while they sat on the floor singing the national anthem and waving the national flag.

Despite the shrinking civic space for civil demonstrations under President Muhammdu Buhari, public figures have disclosed that the second memorial will hold primarily at the Lekki Tollgate in Lagos and other cities across the country as citizens may wish to gather.

Thespian and social justice advocate Debo Adedayo, alias Mr Macaroni wrote through a tweet announced that he would be joining the walk in honour of victims of police brutality.

“Peaceful walk tomorrow in honour of all #EndSars and police brutality victims. We no go fit ever forget!!!!✊” he tweeted.

Rapper and songwriter Folarin Falana “Falz” also tweeted that he will be joining the walk to “honour fallen heroes from the #LekkiMassacre #EndSARS.”

According to information on the E-flyer shared by the duo, the memorial procession is organised to feature walking and driving through the tollgate accompanied by horn blaring, solidarity songs and chants from the participants. While the event is slated to hold from the hours of 8:00 a.m. to 11:00 a.m., citizens are encouraged to visit the venue at any time of the day to pay their respect to the fallen.