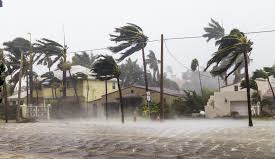 A photo of windstorm used to illustrate story

One person was killed and about 70 houses got destroyed when windstorms battered Unguwar Ban-Dukawa Village in Danbatta Local Government Area  (LGA) of Kano State for four weeks.

“The victims were affected by heavy windstorms that destroyed their houses, killed one and injured four people in the past four weeks in Unguwar Ban-Dukawa,” Mr Jili stated at the presentation.

Mr Jili called on the public to clear their drains to prevent floods.

On his part, the Chairman of Danbatta LGA, Hon. Muhammad Abdullahi-Kore, noted that 70 houses were completely destroyed in Unguwar Ban-Dukawa and Dukawa Villages during the period under review.

“There was a downpour and windstorms that were the first of their kind in the history of the village and these led to the destruction of the houses,“ he said.

Mr Abdullahi-Kore praised Governor Abdullahi Ganduje and SEMA for the quick response and the donation of relief materials to the victims.

One of the beneficiaries, Dahiru Haruna, commended Mr Ganduje and the agency for the condolence visit and the donation.

“About four weeks ago, there was a heavy windstorm which made the wall of my room collapse and fell on my wife Zainabu Abu.

“She was rushed to Babura Hospital but died while receiving treatment,” he said.

Another beneficiary, Nana Ado, said that she was in the room, along with her husband and two children, when a heavy windstorm pummeled the house and one of the walls fell on them.

“My husband got a fracture on a leg, while my two children and l also sustained injuries,“ she said.

Mrs Ado commended the agency for the kind gesture.