Buhari’s final test and legacy may be in the quality of the succession he emplaces for Nigeria. 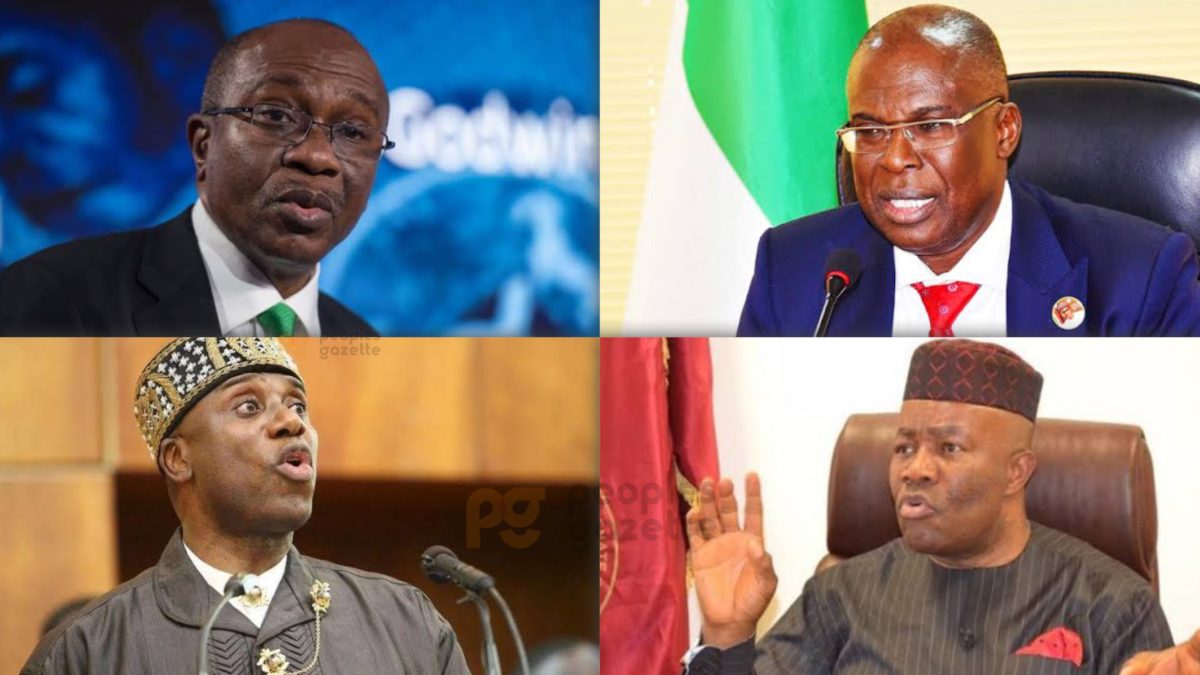 A composite of Emefiele, Silva, Amaechi and Akpabio

There has been a presumption amongst APC politicians in Western Nigeria that the post-Buhari Presidency is their just rewards for the role the region played in installing Muhammadu Buhari as president in 2015. Such a presumption was not without basis. The acclaimed “leader” of the APC, Bola Tinubu who championed the alliance between the Hausa-Fulani-Kanuri North and the Yoruba West that was at the core of the APC may embody such presumption, for very obvious reasons. The essential difference in 2015 to Buhari’s earlier failed attempts at securing Nigeria’s presidency was the involvement of the Yoruba West in the Buhari effort.

The historical reflex of legacy Yoruba politics was to avoid political collaboration with the Fulani based on history and the inherent contradictions of Fulani ethno-religious and political positioning and Yoruba egalitarian social democratic instincts. Bola Tinubu changed all that though the jury is still out on the implications of this legacy. Nevertheless, it would be unkind to deny or minimize Tinubu credit for ensuring the actualization of the Buhari Presidency. Some of us doubted some of the assumptions and presumptions underlining his valiant pursuit of that enterprise (and have been almost completely vindicated!) but no one, least of all the beneficiaries may be seen to question his contribution or commitment to that realization.

The other significant difference in 2015 was the fact that the Christian South which had till then been staunchly opposed to Buhari’s presidency, suddenly changed its mind. This was probably because of the possibly providential participation of a credible Southern Pentecostal Christian from a large, mainstream pro-establishment congregation, Prof (Pastor) Yemi Osinbajo (SAN) of the Redeemed Christian Church of God (RCCG) on the Buhari ticket. Osinbajo apart from making Buhari palatable to the church, also made the Buhari-Osinbajo prospect attractive to the Southern middle class and professionals, not surprisingly particularly lawyers, a very influential and assertive professional group. It helped that Osinbajo is not the type of individual who has many enemies, a generally likeable, amiable and connected individual with a large network of relationships across Igbobi College, University of Lagos, the legal profession, the church and society at large.

Whatever the justification for the Yoruba West to feel entitled to a post-Buhari APC presidential ticket, and there are many, that assumption has suddenly been challenged from several fronts in the South-East and South-South geopolitical zones. It does not seem to me that the South-East’s quest for an APC presidential ticket (represented by amongst others Senators and former Governors Orji Uzor Kalu and Rochas Okorocha; Governor Dave Umahi of Ebonyi and possibly Dr Chris Ngige) has gained much traction.

The South-East may be able to mount a more credible challenge within the PDP in which the region may justifiably have a strong claim to such preferment and where there are a few credible aspirants like Peter Obi and Senator Anyim Pius Anyim.

On the other hand, the South-South appears to be making a more serious claim to the APC presidential ticket and for several reasons, some constituencies in the northern APC appear to be thinking seriously about the region, though it is not yet clear that Buhari himself is persuaded by such calculations. Many of the motives behind consideration of the South-South may appear suspect, irrespective of the merit or otherwise of the particular individuals being considered. The general strategy appears to be to find a weak candidate, from a “weak” zone who may govern as president on behalf of some largely northern cliques within the APC and who may not disturb his patrons’ access to the national coffers.

That undoubtedly appears to be the rationale behind the strange strategy emanating from some quarters who appear to want to plot a return of former President Goodluck Jonathan, who the APC discredited and defeated in 2015, to the presidency.

Jonathan in the view of his protagonists, has the added benefit of being entitled to only one additional term in office, thus ensuring an early return of power to his would-be new masters! It would seem that Jonathan is now actively evaluating this stratagem and may have started taking steps towards joining the APC and running for president once again. This would be a very risky move for Jonathan who could potentially alienate his last support bases particularly in South-South and South-East Nigeria, without the assurance of securing the coveted presidency. It is not easy to see how Buhari, Nasir El-Rufai, Rotimi Amaechi, Bola Tinubu and other APC leaders would campaign for Jonathan! Would they say his government was not as corrupt as they thought during the campaigns in 2014 and 2015?

The other candidate who might fit the profile of a “weak candidate from a weak zone” may be Godwin Emefiele, aka “Meffy 2023” who is a Delta Igbo who has lived largely in Lagos and speaks Yoruba well. As I wrote earlier, apart from possibly having some billions of his own, Emefiele may also enjoy the support of some members of Nigeria’s billionaire class and over his leadership of the Central Bank of Nigeria under Buhari, appears to have secured the confidence of several members of Buhari’s inner caucus. As I said, the motives behind some of these propositions are possibly self-serving and may undermine the credibility and legacy of an outgoing President Buhari.

I gather that Minister of State for Petroleum, Timipre Silva who served one term as Bayelsa governor is also under consideration. The position he occupies (and the lengths the administration went to in its first term to dispense with Silva’s case with the EFCC and return a reported 27 seized properties to him) suggests Silva is close to Buhari’s heart and one or two sources have told me I should pay some attention to him. Probably the strongest of the aspirants from the South-South may be Mr Rotimi Amaechi who is an APC insider and the only one from the region who can claim to have played a critical role in creating the party and putting Buhari in office in 2015 and 2019 as director-general of Buhari’s campaign. He has served since then as a powerful minister of transportation and may be credited with some of Buhari’s achievements in the rail infrastructure sector.

Amaechi (and all the other South-South contenders, including I am told, Niger Delta minister, Godswill Akpabio) face severe electoral limitations however, being from a low population and low voting geopolitical zone in which they have the added disadvantage of being in opposition in their home states! It would appear that if APC zones its presidential ticket to the South, its best electoral formation would be the South-West and the North-West or North-East which are its areas of strength as well as have large voting concentration. It may be noted that the PDP may be competitive in 2023 so APC may not have the luxury of presuming victory irrespective of political calculations!

In addition, Nigeria’s history suggests that a national government that wittingly or unwittingly excludes Western Nigeria may be inherently unstable and if the APC finds itself unable to support all of Tinubu, Osinbajo, Fayemi, Fashola, Gbenga Daniel, Amosun and even Akinwunmi Adesina, the region may justifiably feel rejected (and used and discarded) by the party! Buhari has faced severe challenges in delivering on his three-fold agenda of creating jobs, fighting corruption and ensuring security. His final test and legacy may be in the quality of the succession he emplaces for Nigeria.