The event, held at the Kasarani Stadium, is Kenya’s fifth presidential inauguration. 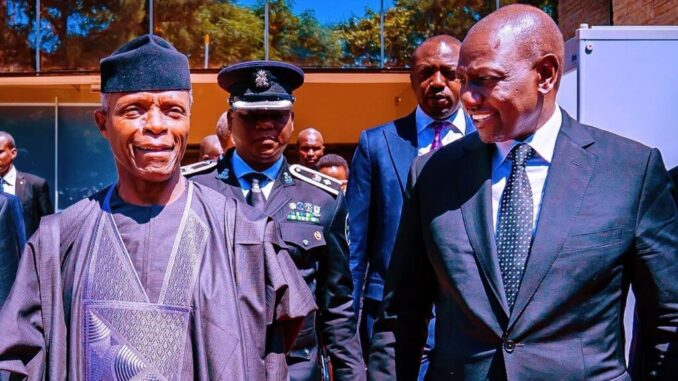 Vice President Yemi Osinbajo, alongside presidents of 21 other countries on Tuesday in Nairobi, attended the inauguration of William Ruto as the president of Kenya.

The event, held at the Kasarani Stadium, is Kenya’s fifth presidential inauguration.

Mr Ruto was declared the winner of the August 9 presidential election after defeating his rival, Raila Odinga.

The event featured inspection of guards, swearing-in, military parades, transfer of sword, seal, Kenyan Constitution to the new president, musical renditions, and cultural display, among others.

The chairperson of AU, representatives of the Commonwealth, and other regional and international bodies were also at the event.

In his speech, Mr Ruto applauded the Kenya Independent Electoral and Boundaries Commission for credibly acquitting itself  under “exceptionally challenging circumstances.”

Mr Ruto, 55, served as Kenya’s deputy president since 2013 when he was elected as outgoing President Uhuru Kenyatta’s running mate.

In October 2014, he served as acting president when Mr Kenyatta honoured an invitation to answer his criminal case at the International Criminal Court (ICC) in The Hague, Netherlands. Mr Kenyatta’s charges were later dropped.