“There is hardly a day that I don’t call or speak to one of them because, in politics, you go with the people you share things in common.” 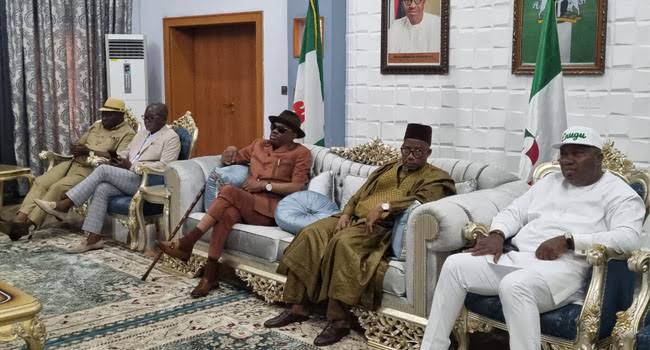 Governor Samuel Ortom of Benue, alongside three other governors under the aegis of the Peoples Democratic Party (PDP), have paid a solidarity visit to their counterpart in Bauchi State, Bala Mohammed.

Mr Ortom was accompanied in the visit by Nyesom Wike of Rivers, Okezie Ikpeazu of Abia and Ifeanyi Ugwuanyi of Enugu State.

Mr Wike, who spoke on behalf of the team’s leader, apologised on behalf of Oyo Governor Seyi Makinde, who could not make the trip due to other engagements outside the country.

He said the visit was in solidarity to fraternise with Mr Mohammed over the recent happenings between him and the PDP presidential candidate, Atiku Abubakar.

“We are here to find out how things are with him and if there are areas we could offer useful advice to him.

“Whatever affects him affects us generally, and that is why we came and nothing more than that,” he said.

Responding, Mr Mohammed said he was highly impressed and happy to receive his counterparts on a solidarity visit.

“They call themselves the integrity group, and I’m supposed to be with them, but they excommunicated me for some reasons best known to them.

“I’m highly connected with each and every one of them. There is hardly a day that I don’t call or speak to one of them because, in politics, you go with the people you share things in common.

“One thing I appreciate about them is that they look at your challenges. Their own particular ideas and principles may be slightly different from mine, but certainly, I bear and feel their pains as much as they do feel my own pains.

“We share so much in common with you, and you know I have challenges in Bauchi State. The challenges of anti-party, challenges of undercutting some of the treachery and mischief,” he said.

Mr Mohammed said the visit availed him the opportunity to confide some of his worries, fears and apprehensions.