Retirees trooped out on Wednesday in Port Harcourt to protest non-payment of their pension and gratuities. 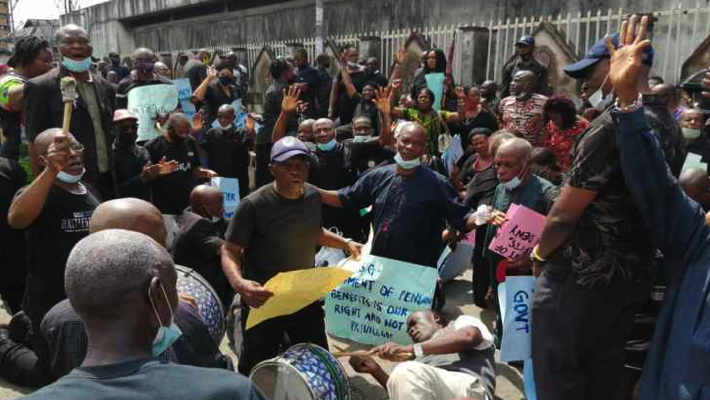 Hundreds of unpaid retired civil servants on Wednesday staged a protest in Port Harcourt, over the failure of Governor Nyesom Wike to pay their benefits.

Mr Ati lamented that several efforts made for the government to pay have fallen on deaf ears.

The Gazette learnt the pensioners had earlier planned three days’ protest at the gate of the government house but the intervention of the state commissioner of police cut off the plan.

“We had planned to go to the government house to protest but the commissioner invited me and other leaders to his office and pleaded that we should call off the protest so that he will speak with the governor,” Mr Ati told The Gazette.

Mr Ati whose arrears are close to forty months said; “that is why we called off the protest. But, after two weeks, if nothing is done, we will come back.

Addressing the pensioners, Friday Eboka, the state police commissioner said protesters’ complaints will be discussed with the state governor.

Mr Eboka appealed to protesters who were carrying placards with different inscriptions, to sheath their swords.

Mr Eboka’s words; “I am aware that some of you retired since 2012 until now you have not gotten your gratuities.

“I want to assure you that I will pick it up from this place because very soon I will retire and if they do not take care of you, you will not take of me.

“I will carry your grievance, all you have articulated and pass it on to the governor to look into your plight.”1

The Gazette had reported several protests by unpaid retirees, many of whom had lost their lives as they could not afford medical bills in their old age.

In February 2021, pensioners in Rivers State  appealed to Governor Nyesom Wike to approve the payment of the outstanding pension liabilities of N70 billion.

Their demands have however not received favourable consideration from the governor.

Instead, Mr Wike had rather preferred to lavish money or relatively more comfortable judges and lawmakers. Critics say such largesse could have better been channelled to alleviate retirees’ plight.

In March, the governor spent over N350 million to host Grammy-winning artist, Burna Boy, and other entertainers, at a state reception in honour of the state-born singer.