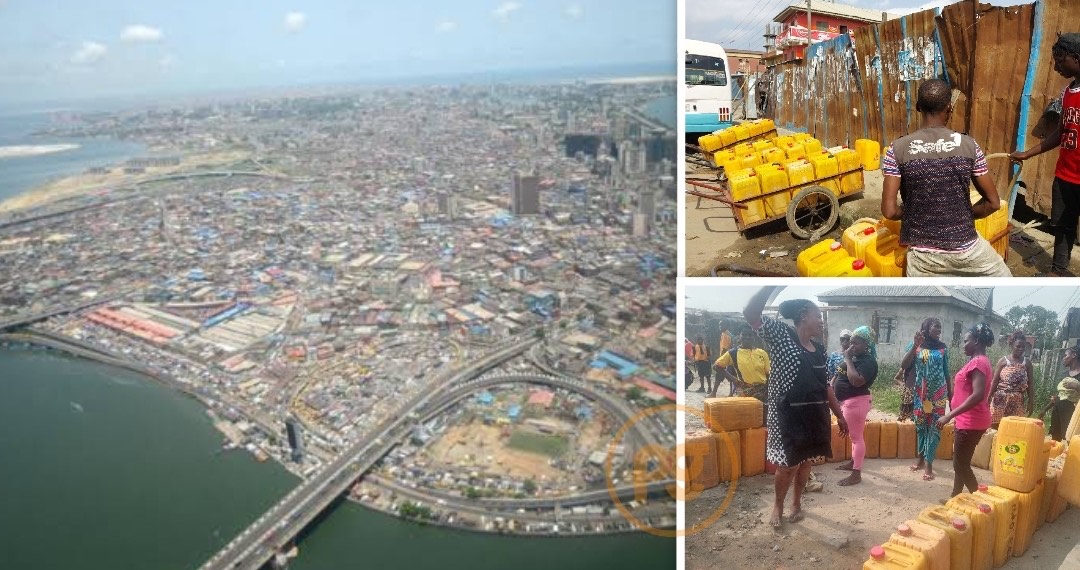 The mairuwa (a Hausa word for water vendor) pushes a 10-jerrycan cart up Kujore Street in Ojota. His taut, dark biceps glistens under the scorching sun as cold sweats drop from the crown of his head. Housewives with just wrappers clinging to their bodies and young children balance buckets of various shapes and sizes on their heads. It was a weekend. They must fill every container to save up water for the week ahead. Each weekend the routine is repeated. Water is abundant in Ojota. But safe and clean water is liquid gold.

In Igando, Surulere, Lagos Island, Oshodi, and Ebute-Metta, a jerrycan of water costs about N50. In other places, the prices can be steeper. In 2017, Lagos State Water Regulatory Commission said about 50 per cent of patients in health centres in Lagos were treated for water-related ailments.

Water, water, everywhere, not a drop to drink

“Water, water, everywhere, and all the boards did shrink; water, water, everywhere, not any drop to drink,” says the famous refrain in Samuel Taylor Coleridge’s poem, ‘The Rime of the Ancient Mariner’. Day after day, the mariners in Mr Coleridge’s poem felt “stuck, no breath, no, motion” and became as idle a “painted ship upon a painted ocean.” Close to two centuries after these lines, many lands across the world, surrounded by bodies of water, still thirst for a drink.

Lagos is one of them.

Lagos, the second-most populous city in Africa and the largest city in Nigeria, is dominated by its system of islands, sandbars, and lagoons. The city itself sprawls over what used to be the four main islands. Its water bodies cover over 40 per cent of the land, with lagoons and creeks occupying 22 per cent of its area. Until the effects of climate change became more prevalent, it often rains in Lagos, with the heaviest rainy season from April to July and a weaker rainy season from September to November.

“Scarcity of water is a major public health problem globally. Water is essential for drinking and other uses, particularly for personal hygiene. The most important step is to prevent water scarcity. Well-treated water should be available to the general public, and appropriate health education should be provided to people so they can purify or treat the water they use for drinking and cooking,” a public health expert, Prof Tanimola Akande, tells Peoples Gazette.

No clean water, no problem?

Scientists say water scarcity occurs when the demand for safe water is higher than the supply of usable water in a given area. UNICEF and WHO report says, one in three people globally do not have access to clean drinking water, which is about 2.2 billion people globally. The UN recommends a minimum of 50 litres of water for drinking, cooking, washing and maintaining personal hygiene daily.

The scarcity of water can cause diseases, Mr Akande points out.

“When water is scarce, there is a high tendency that people seek to drink water from sources that are polluted, which exposes individuals to preventable health risks. Unsafe water often leads to various forms of water-borne diseases such as cholera, diarrhoea, dysentery, hepatitis, typhoid and polio,” the health expert further notes.

The United Nations says safe water and access to proper sanitation could help eradicate poverty, build peaceful societies and ensure that no one is left behind on the path toward sustainable development. Goal Six of the SDGs (clean water and sanitation) aims to ensure that the world population has access to clean water.

“This can lead to high cases of diseases and even cause epidemic disease. Cases of water-related diseases should be properly investigated to determine the source, through this, appropriate measures will be initiated to control further spread of diseases,” adds Mr Akande.

Dr Olasimbo Davidson, a public health consultant, says a community programme or statewide campaign on electronic media should be launched and renewed every six months to remind the public how to identify unsafe water sources.

“Teaching communities about simple water purification methods is key. Primary health centres should also educate mothers about safe water for babies. At times more attention is being paid to the use of ORS in managing diarrhoea than to water purification strategies,” Ms Davidson advises.

Squeezing water out of stone

In Lagos, the daily experience of millions of its inhabitants reveals that it is easier for a camel to pass through the eye of a needle than for them to scoop clean and safe water from the ground. With the rainy season filled with dry spells, residents in overcrowded rented apartments struggle against one another to place their buckets at vantage points to collect rainwater. The rains have largely been sporadic. Experts blame climate change.

Mr Dazi explains that the major threat to climate change in Lagos is sea-level rise, causing coastal communities to lose a large volume of freshwater. The situation is aggravated by “anthropogenic activities.”

“Water crisis, to a common man, is the difficulty to access clean drinkable water or water for domestic utilisation. Today in Lagos, sources of freshwater have been destroyed or degraded, as exemplified by the constant sand filling of wetlands in the state,” states Mr Dazi. “Water pollution took over rivers and ponds in the state. Therefore, the root cause of the water crisis in the state is the unregulated destruction of freshwater sources in the state. Over the years, rural communities have had access to water for drinking and domestic utilisation, sourced from streams, rivers and their likes.”

The NCF official discloses that these water sources have degenerated due to wrong government policies and over-priority of infrastructural development.

“This total negligence today has cost several communities their freshwater sources, without alternatives for the communities,” he says.

Environmentalist Nnimmo Bassey believes that access to safe water is a human right, and the Lagos government must commit to necessary financial investment.

“Having enough water and access to good water in Lagos requires public financial investment. If the government understands that every citizen has a right to potable water and sanitation, no expense should be spared in providing water,” says Mr Bassey. “This lack of care to ensure that citizens have unfettered access to potable water and sanitation is the root cause of the water crisis.”

The environmental activist also mentions that the government’s negligence in providing potable water is a national embarrassment. He stressed that most public waterworks were built in the 1960s. Those built during the colonial era have become decrepit “and have not been replaced.”

“Lagos must not see the provision of water as a business but as a public service.

Government has to accept the responsibility to make water available. Government should also ensure that our streams, creeks and rivers are not contaminated by being used as waste dumps and encourage people to drink water directly from natural water bodies,” Mr Bassey suggests.

Before the government’s investment kicks in, Mr Dazi advises Lagos residents to process water for personal use because freshwater sources can no longer serve the population in Lagos.

“It remains logical to say households in the future will have to process their own water for both drinking and domestic use in Lagos, even in rural communities. Freshwater sources have been depleted to a point it can’t take care of the current population size in Lagos,” says the NCF officer.

For decades, Lagosians have taken it upon themselves to find safe and clean water through boreholes and wells.

Lagos water scarcity has become an albatross around the neck of many Lagos inhabitants. The Lagos government admits its failure to satisfy the search and quench the thirst for it. Only 52.5 percent of households have water facilities in their compounds, and 30 percent of Lagos inhabitants have access to safe water despite the LWC claiming it has developed a Lagos Water Supply Master Plan. It says it is a roadmap to take Lagos’ water production capacity to 745 million gallons per day by 2020.

It is 2022, and the water crisis seems to have worsened.

The Gazette contacted Lagos government officials to react to the state’s worsening water situation. As of the time of filing this report, the LWC general manager Adekunle Badmus declined to comment. After several days of promising to get a comment from his principal, the LWC’s spokesman Rasak Anifowose kept requesting more time.

“Currently, the total installed water production capacity is 210 million gallons per day (MGD), which is lower than the current demand,” says the LWC on its website.

In October 2019, Governor Babajide Sanwo-Olu approved N 50.3 billion to complete the Adiyan waterworks, which should have been completed as part of the second stage plan. His predecessor, Akinwunmi Ambode, approved a N17.6 billion budget for the water sector in 2016; the Adiyan project was included.