Hundreds of children roam the environment clumsily kitted in search of chores for livelihood around the sawmill.

Chukwuemeka Ayomide and Oyindamola Olubajo • May 19, 2021 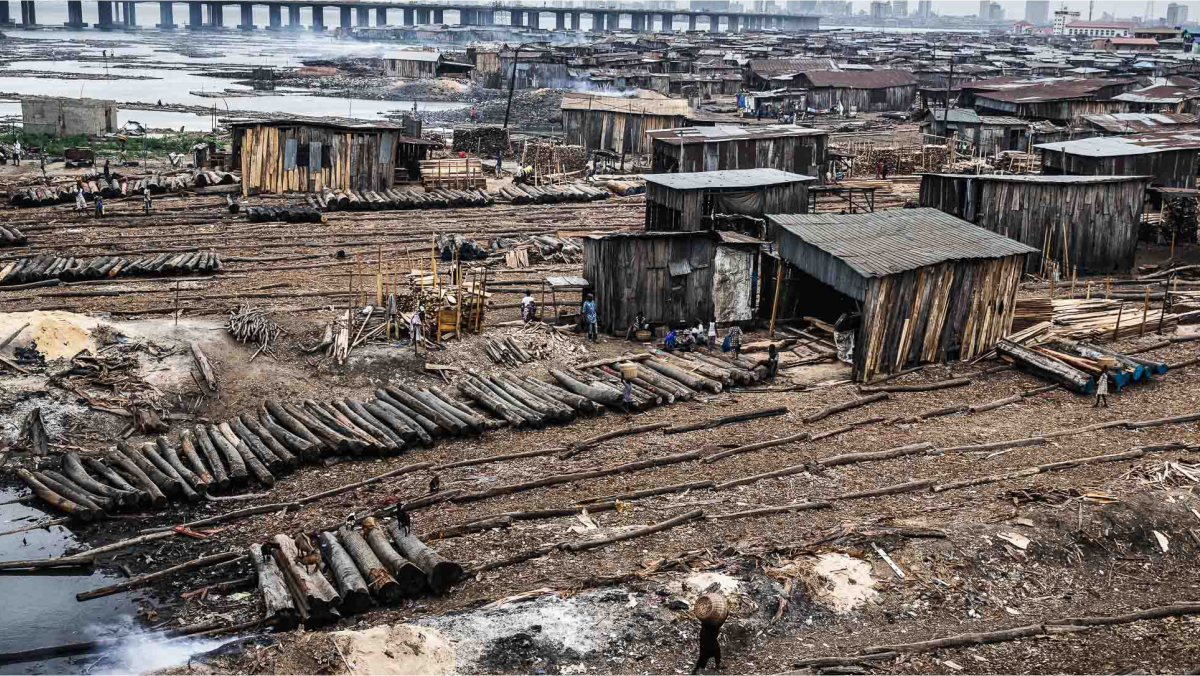 As tiny particles of dust dance up to the cranky musical notes billowing from the running tools at Oko Baba Sawmill, 15-year-old Godwin Ogbonnaya emerges with hazy dust glued onto his sweaty bare body on a sunny afternoon.

Godwin, a school-age boy, is unfazed: it’s just another workday for cutting and setting woods and packing sawdust away for would-be end-users at a charge barely enough to get him through the day.

In the Oko Baba Sawmill, a hub on the banks of the Lagos lagoon, logs of wood dangle afloat as hundreds of young boys make their ways onto the fetid waters to pull them out onto drylands and roll them onto the machines for cutting into different sizes before being converted into planks.

The Lagos State Government had planned the relocation of the sawmill for the first quarter of 2020 due to the environmental risks associated with the market, but no concrete action towards this has been taken so far. The Commissioner for Physical Planning and Urban Development, Idris Salako, had said the market would be relocated to a more suitable environment in the Agbowa area.

Hundreds of children roam the environment clumsily kitted in search of chores for livelihood around the sawmill. Sellers of food and alcohol are also ubiquitous, offering their goods to a ready market of consumers, potentially including children. The sawmill has for decades been a home for numerous wood merchants and allied workers seeking to make a quick buck.

As the machines split wood into sizes, sawdust is generated that fills not just the air but also the ground. Children and adults from Makoko neighbourhoods come to pack as much as they can as fast as they can, often to smoke tilapia and other types of fish caught in the nearby lagoon. Other times, they fill swampy neighbourhoods with the sawdust.

Although there are no exact statistics on how many children are scattered all over Oko Baba, with risks of harmful contamination from sawdust particles, many children are seen moving around in twos and threes with basins to collect sawdust and wood pieces that sawmill boys consider as waste.

Some of the children found in Oko Baba, aged between six and 17, work for their parents after school. Some gather the wood shavings, load them on their canoes and transport them to Makoko for sale.

Many have not obtained any form of formal education as they neither understand the English nor even Yoruba. They speak French and Egun, a common language among Makoko residents.

Seeking to ascertain the number of children who visit Oko Baba daily, Peoples Gazettes sought the comment from the sawmill’s management. One of the officials, who described himself as Chairman Titus, declined on the basis that he “would not want to address the press at this moment.”

Although barely 15 and living with his parents, Godwin has been picking and cutting woods to fend for himself for years.

Focused on arranging split woods and dressed in a yellow T-shirt and knicker, the high school student told The Gazette that he started working at the sawmill since he was only nine years old.

“I’m in SS2 and sometimes come here to work after school. I’ve been coming here to work since six years ago to support my parents and I use the money I earn to fund my education.”

Another sawmill boy, who identified only as Junior, said he is not pleased with the job, but he must fend for himself nonetheless.

“I started last year and what I mostly do is to pick wood after the machine has cut it. I earn like N1000 a day,” he said.

Junior, however, wished the government could provide support for him and other children engaged in factory work, as he described the job as “stressful.”

Also, Jelah, 13, of Egun stock, a minority ethnic group in Nigeria’s South-West, told The Gazette that he resumes at the sawmill every morning to make money from transporting heaps of sawdust from the factory to a waste site for incineration.

Young Jelah said that he is paid based on the amount of sawdust he is able to transport.

“I usually resume very early in the morning to pack wood waste from the factory to a dumpsite where it will be burnt,” Master Jelah said.

“I earn between N600 and N800 daily but I get paid at the end of the week, and my mummy knows that I come here to work,” he added.

In 2003, then-Nigerian President Olusegun Obasanjo signed the Child Rights Act into law to preserve the rights of children and protect them from exploitative labour.

The Act provides that no child shall be “employed to work in any capacity except where he is employed by a member of his family on light work of an agricultural, horticultural or domestic character; or required, in any case, to lift, carry or move anything so heavy as to be likely to adversely affect his physical, mental, spiritual, moral or social development; or employed as a domestic help outside his own home or family environment.”

Also, the Labour Act of 2004 in a similar vein restricted young persons under the age of fifteen from working in any industrial undertaking.

The act also restricted children from engaging in any form of employment that could be hazardous or injurious to their health.

“No young person shall be employed in any employment which is injurious to his health, dangerous or immoral; and, where an employer is notified in writing by the Minister (either generally or in any particular case) that the kind of work upon which a young person is employed is injurious to the young person’s health, dangerous, immoral or otherwise unsuitable, the employer shall discontinue the employment, without prejudice to the right of the young person to be paid such wages as he may have earned up to the date of discontinuance,” the law added.

“Many children between the ages of 10-14 come here to work on a daily basis, some resume after school while some don’t even go at all,” Wale Oderinde, one of the sawmill workers told The Gazette in Yoruba.

Mr Oderinde said although working at the sawmill requires much strength, many children work to fend for themselves while others work for their parents and guardians.

Pointing at some children roaming around the market, he said “those ones work for their parents, but we have those of 10 years who work for themselves.” He also noted that “they work between 8:00 a.m. and 5:00 p.m. as required by the authorities at the sawmill.

Asked when they close for the day, Mr Oderinde said “initially they closed by 7:00 p.m., but since COVID-19 broke out last year, it has been made compulsory that no machine works once it is 5:00 p.m.” He stressed that none of the children works as a full-time worker for him, but he engages those who pack woods after the machine splits them on an ad-hoc basis.

“The minimum I pay them weekly is N2,600, once they meet up with 200 cubics, that’s what they get,” he said, noting that some get more depending on how much effort they make.

“I grew up knowing Oko Baba, I’ve spent over two decades in this sawmill and I can tell you it is a very lucrative work,” another sawmill worker Bright said. “That’s why you see hundreds of people including children coming here to work.”

Bright said some students who alongside their parents struggle to make ends meet also work at the sawmill during holidays.

Also attesting to children’s involvement in factory work, he said the children are paid based on how many cubic metres of wood they are able to work on, noting that “400 cubic is a day’s work. The workers and machine operators collect the same amount of money,” and “many of the children are uneducated, although some help their parents, some come here to pick woods to sell to their people who use them for smoking fish.”

Environmental and town planning ministries of Lagos did not return multiple requests seeking comments from The Gazette position on social and environmental concerns uncovered by our report.

Nigeria’s deputy labour minister Festus Keyamo did not respond to calls or messages when reached by The Gazette.

“Orphans and vulnerable children are actually prone to child labour in their quest for survival. They are also prey to child labour because they are cheap labour. The majority of these children are not even paid for the service they are providing, they sometimes work just to get a daily meal,” a child rights advocate Olubukola Adebiyi said.

“Advocacy needs to be intensified amongst the communities, cultures and businesses engaged in child labour. Both the government and CSOs also need to increase their awareness against the practice,” Ms Adeniyi added while reiterating the fact that the call is covered within the Lagos State Child Rights law.

“All relevant government parastatals need to increase their aggression in apprehending and punishing those involved in child labour across Lagos State. Once the masses recognise that the government says ‘NO’ to child labour, they will desist from practising it,” she added.