Nigerians have been protesting in different cities this week to demand #EndSARS, but police have tried to suppress the movement. 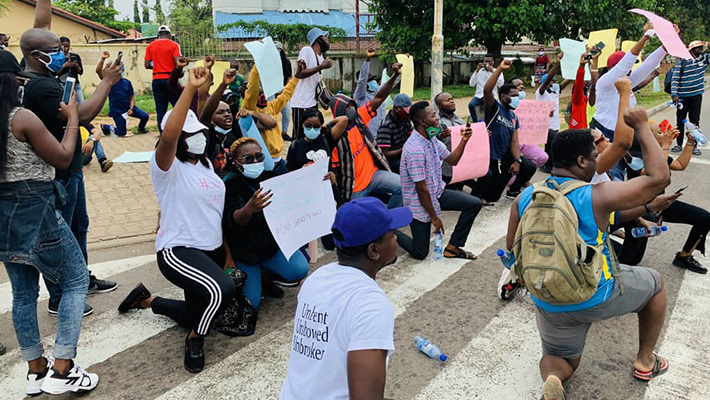 On Friday morning, about 50 people gathered at the Millennium Park in Abuja to join the #EndSARS movement. Police dispersed them with gunshots and teargas.

Victor Chinyeaka was one of the demonstrators. He told Peoples Gazette, “They threw teargas at us and they shot at us. I was bleeding from my hands and eyes. We had to run for our lives.

“There was teargas in front of me, I couldn’t see.”
Videos from the scene of the protest show at least 20 police officers standing on a part of the street covered with teargas fumes.

Some demonstrators were injured in the stampede.
“The response of the police that came out to attack us did not reflect the peaceful nature of the protest. We were non-violent. We only had water bottles and placards,” Mr. Chinyeaka said, “and last time I checked, placards are not weapons. You cannot use placards and water bottles to inflict harm on people.”

Nigerians have been protesting in different cities this week to demand the dismantling of the Special Anti-Robbery Squad (SARS) of the police. SARS officers are notorious for extortion, for harassment and for fatally shooting people they consider suspects.

Protesters in Lagos and others this week say police have tried to suppress the movement.