The incident occurred along the Badde-Ungwan Ayaba-Keffi road, where bandits attempted to abduct occupants of a commercial vehicle approaching from Abuja. 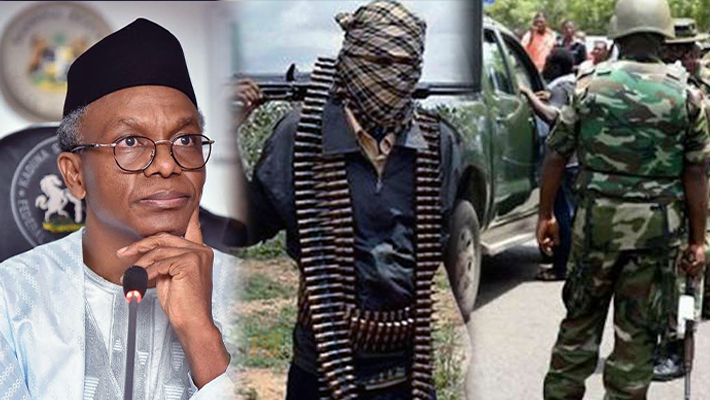 A composite of El-Rufai, bandits and soldiers used to illustrate the story

Samuel Aruwan, state commissioner for internal security and home affairs, confirmed this development in a statement on Saturday in Kaduna.

Mr Aruwan said the troops reported that two kidnap attempts were foiled at different locations within Jema’a LGA, resulting in the rescue of six residents.

“According to the reports, the incident occurred along the Badde-Ungwan Ayaba-Keffi road, where bandits attempted to abduct occupants of a commercial vehicle approaching from Abuja.

“The troops responded to a distress call and on arriving at the scene, rescued five abducted passengers, after a search-and-rescue exercise,” Mr Aruwan said.

He also disclosed that in another incident, the troops rescued one person along the Fanock-Kyayya-Keffi road, Jema’a LGA, after he had been abducted from his vehicle by bandits.

“He was rescued with minor leg injuries and was taken to hospital for medical attention,” Mr Aruwan said.

The commissioner said the state government commended the troops for their efforts in thwarting the kidnappings and praised their promptness in responding to the incidents leading to the rescues.