Two dead, one injured as trailer crashes into Danfo bus on Lagos-Ibadan highway

Mr Umar said the accident that occurred at about 4:30 a.m., was caused by excessive speed and loss of control by one of the drivers. 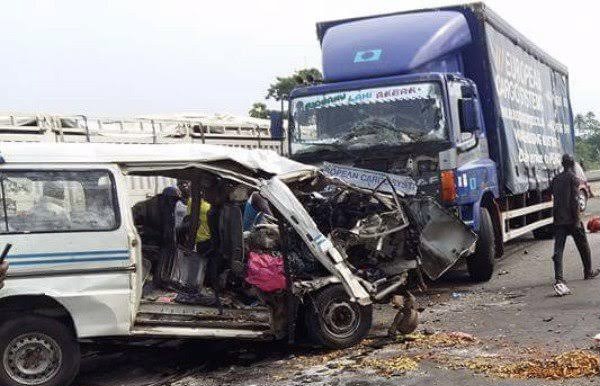 A photo of Bus-truck crash used to illustrate the story

Two persons died while one other sustained injury in an accident involving a trailer and a Volkswagen bus otherwise known as ‘Danfo’ at Oniwowo, Ogunmakin area on the Lagos-Ibadan expressway on Wednesday.

Ahmed Umar, the Sector Commander of the Federal Road Safety Corps (FRSC) in Ogun, confirmed the incident to reporters in Abeokuta.

Mr Umar said the accident that occurred at about 4:30 a.m., was caused by excessive speed and loss of control by one of the drivers.

He said that the vehicles involved in the accident were an Iveco trailer marked DUK 517 XA and a Volkswagen bus with registration number MUS 05 YF.

The FRSC boss stated that a total of four men were involved in the accident.

Mr Umar added that the injured victim was taken to Victory Hospital, Ogere, while the remains of the deceased were deposited at FOS Morgue, Ipara.