Earlier, Mr Boris had pointed out Putin’s invasion of Ukraine was “testing not just Ukraine but all of humanity.’’ 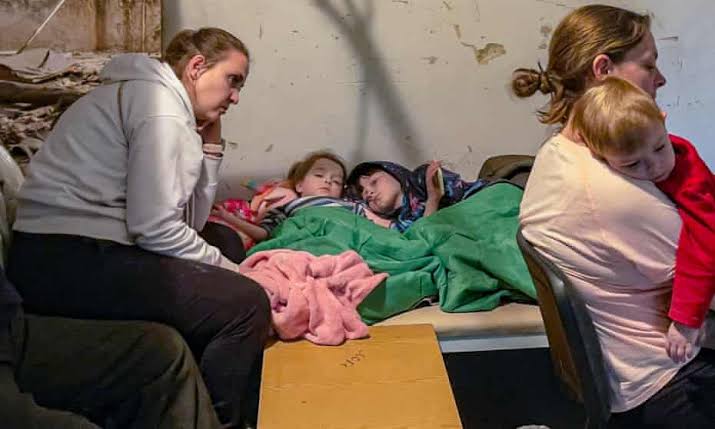 Local citizens of Chernihiv hide in the basement of Chernihiv Central Hospital after an airstrike alert. Photograph: Sergey Zosimenko via Anton Skyba

The UK government has announced it is providing cancer treatment for 21 seriously ill Ukrainian children as Britons were urged to open their homes to people fleeing the Russia-Ukraine war.

The children and their immediate family members arrived from Poland on Sunday evening and would be assessed before being sent to hospitals to continue their care.

“I am proud that the UK is offering lifesaving medical care to these Ukrainian children, the people that have been forced out of their home country by the Russian invasion while undergoing medical treatment,” Health Secretary Sajid Javid said while announcing their arrival.

The children’s arrival came after a Russian attack on a military training base near Yavoriv in western Ukraine, less than 24 kilometres from the border with Poland, a NATO member.

Others are the Netherlands, Sweden and Norway for a summit of the Joint Expeditionary Force (JEF) to discuss the war.

Mr Johnson’s office said he would urge leaders to work together to ensure no other nation falls victim to Russian President Vladimir Putin’s aggression.

Earlier, Mr Boris had pointed out Putin’s invasion of Ukraine was “testing not just Ukraine but all of humanity.’’