The UN chief expressed grave concern over the unfolding situation in and around Europe’s largest nuclear power plant in Zaporizhzhia. 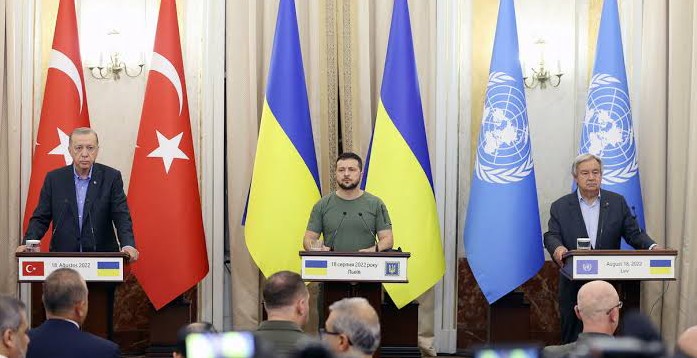 UN Secretary-General António Guterres has expressed fears that fighting near the Zaporizhzhia nuclear plant in southern Ukraine could be suicidal.

Speaking at a press conference alongside Presidents in Lviv, he expressed gratitude for the opportunity to visit again during such a difficult period.

“The heart of the problem that brings us here remains the war,” he said, reiterating that the Russian invasion is “a violation of the territorial integrity of Ukraine” and of the UN Charter.

He stated that the war had inflicted deaths, massive destruction, displacement, and dramatic human rights violations, adding that in line with the Charter and international law, “people need peace.”

The UN chief expressed grave concern over the unfolding situation in and around Europe’s largest nuclear power plant in Zaporizhzhia.

“Common sense must prevail to avoid any actions that might endanger the physical integrity, safety or security of the nuclear plant,” he said, adding that the facility must not be used as part of any military operation.

Mr Guterres upheld the urgent need for an agreement to “reestablish Zaporizhhia as purely civilian infrastructure” and ensure the area’s safety.

After making an assessment, with the agreement of both Russia and Ukraine, the UN Secretariat has determined that it can support the organisation’s nuclear overseer, IAEA, in conducting a mission to the Zaporizhzhia Nuclear Power Plant from Kyiv.

The UN chief outlined that military equipment and personnel should be withdrawn from the plant, no other forces or equipment should be deployed there and the area must be demilitarised.

Commenting on the Black Sea Grain, he said the initiative reflected “a victory for diplomacy” for those caught in a cost-of-living crisis as well as for Ukraine’s hard-working farmers.

Although the Black Sea Grain Initiative was signed a few weeks ago, the UN chief reiterated that “there is no solution to the global food crisis without ensuring full global access to Ukraine’s food products and Russian food and fertilisers.”