“She will discuss a number of development issues, including acceleration of the Sustainable Development Goals and climate change,’’ he said. 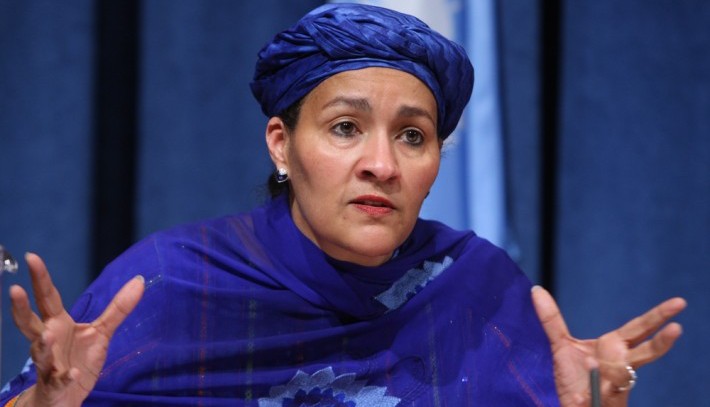 UN Deputy Secretary-General Amina Mohammed has travelled to her home country, Nigeria, on an official visit.

Mohammed left New York for Nigeria on Tuesday evening, according to the spokesman for the Secretary-General, Stéphane Dujarric.

On Tuesday, Mr Dujarric told journalists at UN headquarters that Ms Mohammed would meet with the senior government officials during her visit.

The spokesman said the Nigerian born UN official would also meet with the UN Global Compact private sector network and the UN team on the ground.

“She will discuss a number of development issues, including acceleration of the Sustainable Development Goals and climate change,’’ he said.

Giving an update on the humanitarian situation in Ethiopia, Dujarric said the World Food Programme (WFP) reported that four convoys carrying humanitarian aid had arrived in Mekelle, in Tigray.

According to him, those arrivals have taken place since November 25.

“More than 150 trucks have arrived so far, with WFP sending in more daily to meet the overwhelming needs of the 5.2 million people in Tigray,” he added. “As you’ll recall, all roads into Tigray had been closed for nearly a month due to clashes and lack of the appropriate clearances.’’

In Amhara, the spokesman said WFP had delivered food to 100,000 people in Dessie and Kombolcha in the past week.

He said these were the first distributions in these towns in nearly one month, adding that WFP and its partners will deliver aid food to more than 450,000 people there in the next two weeks.

Mr Dujarric said WFP had stressed that the humanitarian response in Ethiopia continued to be threatened by insecurity, impeded road and air access, and a lack of fuel and cash.

“It calls on authorities to facilitate even more the movement of supplies across battle lines and to allow access to those in need wherever and whenever needed. WFP has more than 67,000 metric tonnes- that is about 1,700 truckloads of supplies – stored in northern Ethiopia,” he added. “This is more than enough food to meet the needs of 3.7 million people for two months, but they are hampered by the lack of fuel and access to people in need.”

On South Sudan, Mr Dujarric said UN Peacekeeping Mission (UNMISS) reported that the country was responding to the worst floods in the last six decades, noting that the flooding has led to many people being displaced.

According to him, heavy rains this weekend have made the main road linking the city of Bentiu to the airport and the UN Mission’s base impassable.