Buhari’s regime says it has inaugurated several sites in the six geopolitical zones of Nigeria to actualise its promise of electrifying five million homes with solar energy by 2023. 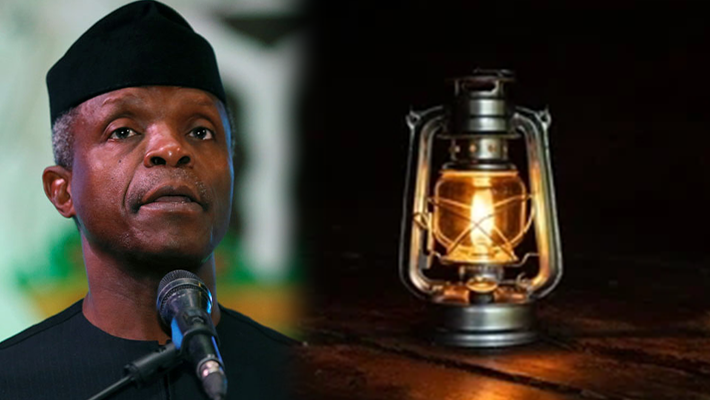 A composite of Osinbajo and Lantern used to illustrate this story

President Muhammadu Buhari’s regime says it has inaugurated several sites in the six geopolitical zones of Nigeria to actualise its promise of electrifying five million homes with solar energy by 2023.

Mr Osinbajo, represented by the Minister of State for Environment, Sharon Ikeazor, said the effort was part of the country’s direct energy compact.

He explained that the project, expected to affect 25 million people, would also create 250,000 jobs.

“The implementation of this job is underway with several sites commissioned and being executed by the private sector and support from government,” added Mr Osinbajo.

He noted that the federal government was eager to follow to a logical conclusion its national energy system and policy via renewables to ensure a cleaner source of energy for Nigerians.

“Over the next decade, every aspect of national energy system is expected to be affected by the climate and energy policy. However, the transition needs to speed up significantly its scope to achieve SDG 7 in line with the goals of the Paris agreement on climate change but while at the same time achieve the 2030 agenda for sustainable development,” Mr Osinbajo added. “Nigeria has developed its energy transition plan which has three core objectives of achieving universal access to energy by 2030, zero emissions by 2050 and industrialisation to alleviate poverty and drive economic growth.”

The vice-president had in April promised that the administration will roll out solar projects across six geopolitical zones in Edo, Lagos, Adamawa, Anambra, Kebbi and Plateau.

“Other Solar companies are also in the pipeline for the Solar Power Naija facility to continue the march to 5 million connections during the life of this administration,” Mr Osinbajo said on April 10 while flagging off the solar infrastructure project in Jangefe, Jigawa.

According to the vice president, to achieve all this, policies supporting enabling deployment and integration of renewable energy and energy efficiency must go hand in hand with a broader set of policies.

Mr Osinbajo said the policies must ensure that industrial and other economic capabilities were aligned with the COVID-19 recovery and other environmental objectives.