The Lagos state government wants to elevate the prominence of the coconut product to showcase the huge cultural heritage of the Badagry people to the world. 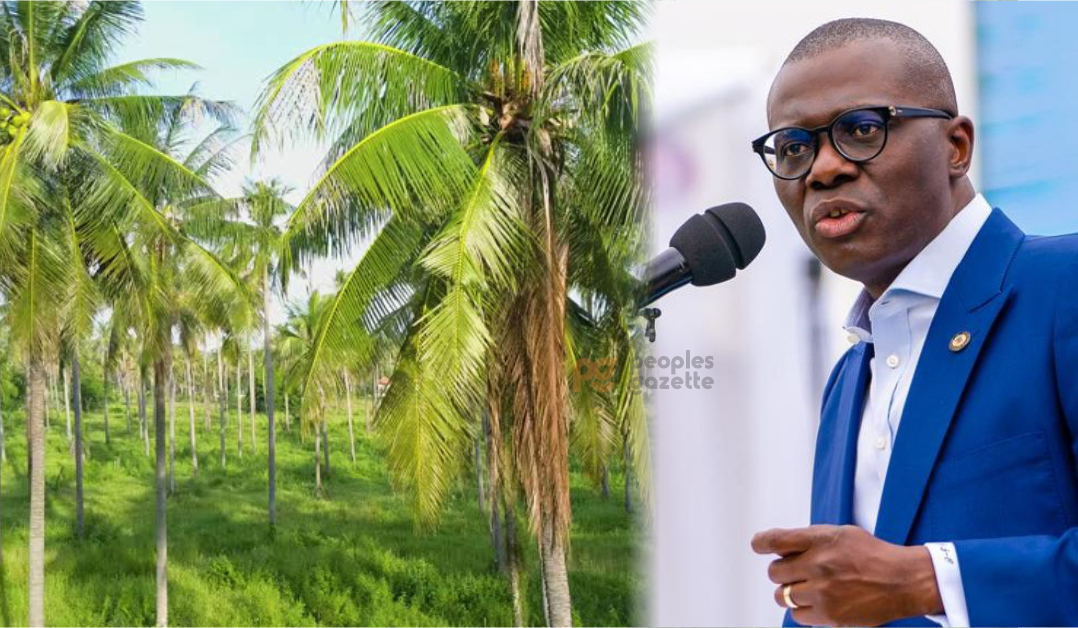 Photo of a Coconut plantation and Governor Babajide Sanwo-Olu used to illustrate the story.

The Lagos state government says it will vigorously market the coconut industry in Badagry as a viable means of boosting tourism and the coconut value chain in the state.

Special Adviser to Governor Babajide Sanwo-Olu on Tourism, Arts and Culture, Solomon Bonu, stated this on Saturday at the ninth edition of Coconut Festival, Agunkefest, in Badagry, Lagos.

Mr Bonu said the objective of this festival is to create increased awareness about coconut, its importance and its viability in terms of economic value in addition to its huge tourism potential.

“The ministry realised that the coconut festival, which has agricultural impact, can also be used as a veritable tool to market Badagry and Lagos a destination of choice in the area of coconut plantation.

“The festival is also aligned with domestic tourism initiative which is currently being driven by the ministry across different local government areas in the state.

“The ministry realised the need to start marketing the arts, craft, festival, attraction and heritage sites that are peculiar to different communities in Lagos.

“The intention is to make all the communities in the state viable in the area of tourism, arts and culture through which they will be able to contribute to the growth and development of the state,” Mr Bonu said.

He said with the suspension of the Greater Lagos project, due to health warnings on the imminent fourth wave of COVID-19, the ministry had come up with a proposal to hold a Christmas celebration in Badagry.

“This is because of the contributions of Badagry to the growth of Christianity in the country.

“This is proposed to be the first of its kind in the state as some preliminary efforts are currently ongoing while the ministry awaits the final approval from the governor,” Mr Bonu revealed.

A legal practitioner and commissioner at Lagos State Audit Commission, Sunday Kappo, urged industrialists and investors to invest in coconut production and preservation.

He urged the residents of Badagry to always replace any fallen coconut tree to boost production.

Meanwhile, a Nollywood actor, Yomi Fash-Lanso, said the presence of the state governor would have added value to the festival.

“You don’t send your Special Assistant or Adviser to represent you in the type of festival. The governor’s presence at this festival would have sent the right signals to investors and stakeholders,” he said.

Another Nollywood actor and indigene of Badagry, Segun Arinze, commended the federal government on the ongoing construction of the Agbara-Badagry expressway.

Mr Arinze urged the company working on the road to accelerate work, adding that the neglect of the road by the past administrations had turned the road into a death trap.

He said that unless the road is fixed, no investors would like to come and invest in the town.

In his remarks, the president of the African Coconut Heritage Initiative – Agunkefest, Doheto Mesi, called for concerted efforts from all stakeholders towards ensuring coconut sufficiency in Nigeria.

According to him, although Lagos accounts for about 70 per cent of Nigeria’s production quota, it is facing some challenges, especially in the Badagry division.

“This includes residents development, indiscriminate felling of coconut and other trees without adequate plans for replanting.

“This situation has caused a deficit in Nigeria’s coconut production capacity, especially now that awareness about the utilisation of coconut and its derivatives are on the increase.

“The situation is evident in the current practice of importation of coconut in large quantities from neighbouring African Countries through Badagry borders by traders to meet the high demand from every part of Nigeria,” he said.